Should "Roseanne" Have Been Cancelled? Public Says YES! 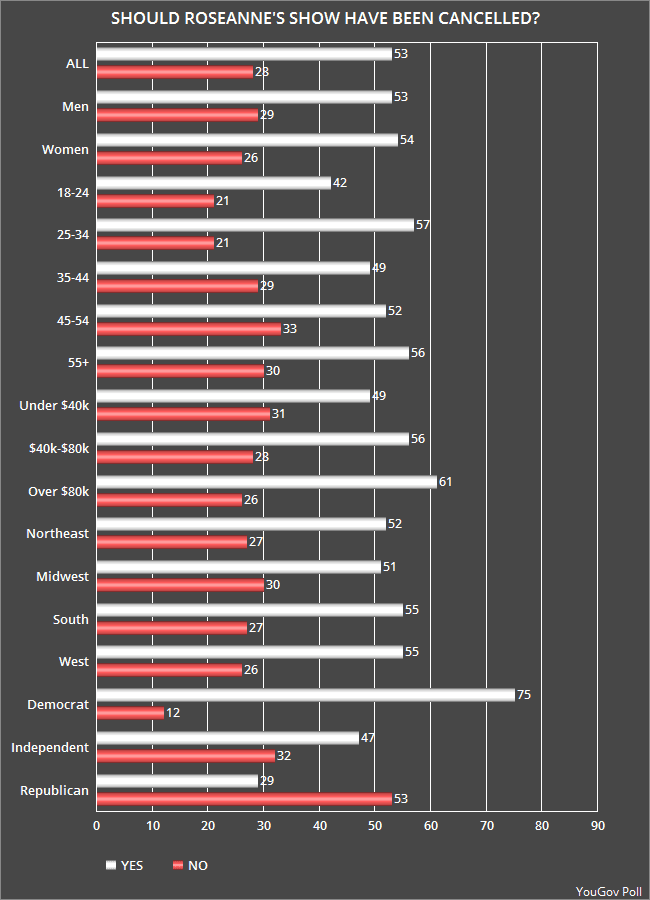 Roseanne Barr tweeted an obviously racist message a couple of days ago, and there was an immediate public backlash. She first tried to pass the statement off as "just a joke". When that didn't suffice, she then tried to blame it on her medication (Ambien), claiming that she is not a racist.

But she is a racist. Anyone who tells racist jokes is a racist. And it can't be blamed on any medication. A medication can loosen inhibitions, allowing you to say what you really feel -- but it won't make you do something against your nature.

The ABC Network understands that, and they don't want themselves associated with people making openly racist statements. They immediately cancelled Roseanne's show. Should they have done that? Absolutely!  And most Americans agree with the cancellation.

After the cancellation, the YouGov Poll questioned a national sample of 7,363 adults -- then weighted the responses to mirror the U.S. population (gender, age, income, region, and political preference). The result was that a majority of Americans agree with ABC's action in cancelling the show (53% to 28% -- a 25 point gap). And every demographic group but one (Republicans) agreed with that -- showing a large gap in favor of cancellation.

ABC and the general public also have rights. They have the rights to oppose statements, actions, and ideas they disagree with -- and they disagreed with Roseanne Barr's racism. Roseanne had the right to make her odious remark, but she doesn't have the right to avoid the criticism and retribution that comes her way because of it.
Posted by Ted McLaughlin at 12:04 AM