Trump Is Trying Hard To Cover For Saudi Murderers 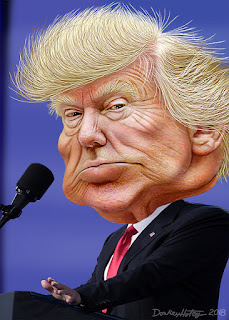 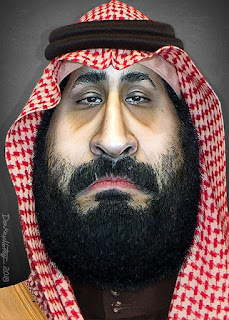 (The caricatures of Donald Trump and Saudi Prince Mohammed bin Salman are by the inimitable DonkeyHotey.)

The Turks have video and audio tapes that are damning, and they have identified most of the 15 murderers (including some of the Saudi Arabian Royal Guards). In addition, the murder took place in the Saudi embassy in Turkey.

In what looks like a repeat of denial than Russia hacked the U.S. election ("Mr. Putin told me that he didn't do it!"), Trump is using the same argument -- that he talked with the Saudi Arabian King and the King denied that his government had anything to do with it. It seems that Trump is always ready to believe the assurances of tyrannical rulers (even when they have shown repeatedly that they cannot be trusted).

Trump even made the ludicrous claim that it could have been "rogue killers". Really? The Saudi's would allow 15 rogue killers to enter their embassy and murder one of their citizens?

Why is Trump trying to cover for the Saudi government? He would have us believe that it is to save American jobs -- that the Saudi's have agreed to buy $112 billion in arms from the United States. That is just another of his outrageous lies! They have agreed to buy less than one-fifth of that amount (and most of that was during the Obama administration).

The truth is that what he's trying to protect is his own business interests (and that of his son-in-law Jared Kushner). Both depend on millions of dollars in Saudi money to stay afloat. In other words, Trump is willing to sacrifice the reputation of this country by apologizing for a murderous regime to protect his own business interests (which he should have given up when he became president).

That is inexcusable, and shows he has no morality or ethics.
Posted by Ted McLaughlin at 12:06 AM