Public Says NO To GOP Plans To Reduce The Deficit 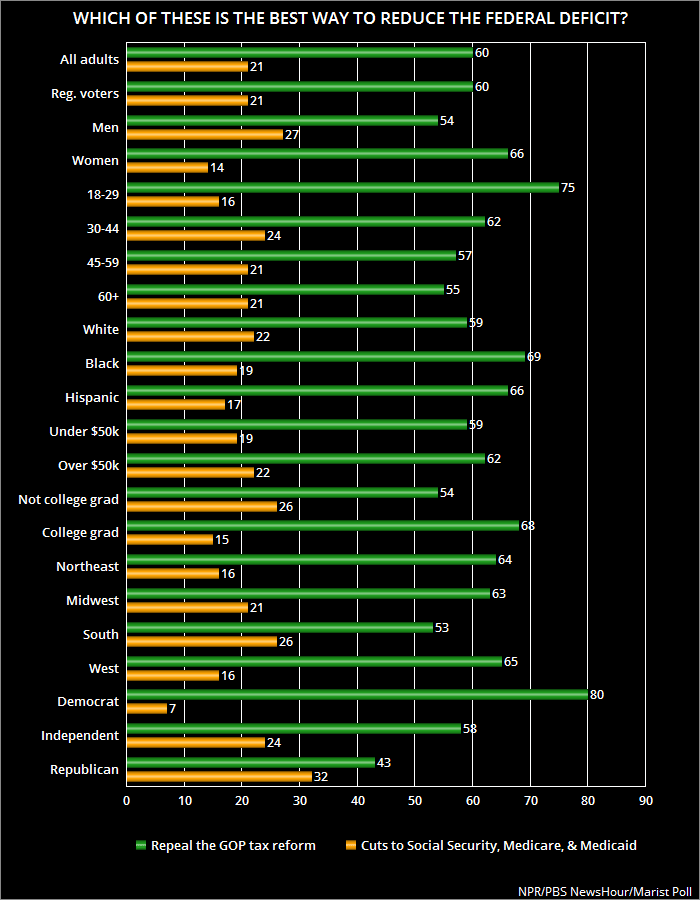 A few months ago, the Republicans passed some tax reforms. They called it a "middle class tax cut" but that was disingenuous. It was a massive tax cut for the richest Americans, and no one else. That tax cut for the rich blew a huge hole in the federal deficit -- increasing it by nearly $900 million this last year, and by over a trillion a year in coming years.

Now congressional Republicans say they can fix the deficit. How? They want to cut Social Security (which added nothing to that deficit), Medicare (which added very little to it), and Medicaid (which is desperately needed by poor Americans).

Fortunately, the American people aren't as stupid as Republicans thought they were. And they don't like the GOP tax reform -- or their plan to cut Social Security, Medicare, and Medicaid. That's what this poll showed. Overwhelming majorities say it would be better to repeal the GOP tax reforms than to cut Social Security, Medicare, and Medicaid. That was the opinion of all demographic groups -- even a plurality of Republicans.

The survey was the NPR / PBS NewsHour / Marist Poll done between October 21st and 23rd of a national sample of 935 adults (including 738 registered voters). The margin of error was 3.9 points for adults and 4.4 points for registered voters.
Posted by Ted McLaughlin at 12:04 AM