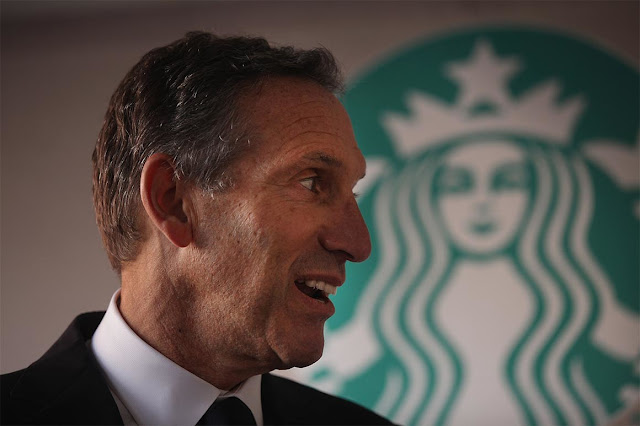 (Photo of Howard Schultz, from Politico, is by Spencer Platt / Getty Images.)

Starbucks magnate Howard Schultz has decided to run for president as an Independent. He doesn't seem to have and agenda -- except to keep Democrats from raising taxes on the rich (especially him).

Here is what former Labor Secretary Robert Reich has to say about the Schultz candidacy:


There are 3 big reasons why Howard Schultz’s self-proclaimed candidacy is troubling:
1. He could be a spoiler in 2020, splitting the vote and putting Trump back in the White House. Even Bill Burton, a former Obama adviser who has joined the Schultz team, publicly warned against third-party voting in 2016.
2. His message is without substance (he uses empty catchphrases like “silent majority” and “common sense solutions”) and his policy proposals are zilch. When asked by John Dickerson on CBS This Morning what his “big idea” was, Schultz declared: “The big idea is very simple: to unite the country. For us to come together. To do everything we can to realize that the promise of America is for everyone.” To the extent Schultz has defined his candidacy, it’s focused on what he’s against—for example, Democratic proposals to raise taxes and provide Medicare for All.
3. He represents the very worst aspect of America’s new billionaire class in politics: He simply anoints himself as a presidential candidate, declares he’s running as an independent so doesn’t have to put himself and his ideas through any party primary contest, and can spend an unlimited amount of his own money marketing himself and his candidacy. American democracy wasn’t built for this.
At this point, there’s not much we can do except tell every pollster we hear from that Howard Schultz should go back to selling coffee.
Posted by Ted McLaughlin at 12:02 AM