Would "Medicare For All" Really Be Too Expensive? 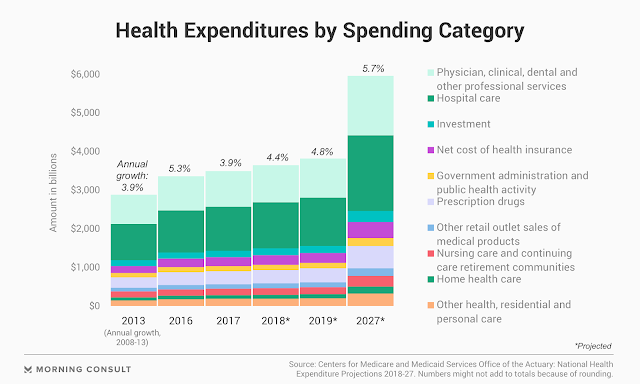 It's beyond debate that our current health care system is broken. At least a tenth of our population has no health insurance, and that's is not expected to get better under current law. In fact, it is gradually getting worse, thanks to recent changes to the law by Republicans. The cost of insurance and medical expenses are both rising faster than the rate of inflation, and the U.S. spends twice as much on medical care per capita than most other developed nations (who cover all their citizens).

The Republicans have no plan to fix our broken system. Even after complaining for years that Obamacare was not the answer, they have been unable to come up with their own answer. Some Democrats have called for a single-payer system, something like Medicare that would cover all U.S. citizens. It's an idea that deserves to be debated.

The biggest objection to a "Medicare For All" system by its critics is cost. It has been suggested that it would cost about 32 trillion dollars over a ten year period. That sounds like a lot of money, and it is -- until you consider what the current system costs (see chart above).

The Center for Medicare and Medicaid Services (CMS) tells us that, under current law, the current cost of medical care in the United States in 2017 was about 3.5 trillion dollars. Extend that over a ten year period and it actually exceeds the "Medicare For All" expected cost by 3 trillion dollars.

But it gets worse. The expected cost for medical care in this country, according to CMS, will grow by about 5.5% each year -- and by 2027 will be nearly 6 trillion dollars a year. When this is considered, the cost for "Medicare For All" is much cheaper than the current broken system. It will cover all citizens and cost less.

Email ThisBlogThis!Share to TwitterShare to FacebookShare to Pinterest
Labels: cost, health care, Medicare for All, single-payer