Trump Administration Wants To Pull The Plug On Sick People 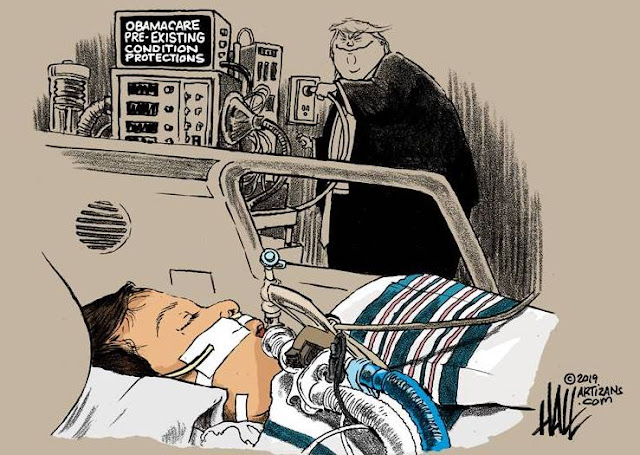 (Cartoon image is by Ed Hall at artizans.com.)

The cartoon above shows Donald Trump unplugging the life support system of a sick person. Some of you may think that's over-the-top. I don't. The latest move by the Trump administration would do exactly that -- by abolishing Obamacare and taking health insurance away from many millions of Americans. For many of them, that would amount to a death sentence.

A handful of Republican-controlled states have filed suit to have Obamacare declared unconstitutional and abolished -- and they got a right-wing judge in Texas to rule in their favor. The case is now pending before an appeals court. The federal government had stayed out of the case -- until Monday.

On Monday, the Trump administration filed in federal court, agreeing with the red states and the decision of the Texas judge. Trump wants Obamacare to be declared unconstitutional.

During his campaign for president, Trump said he wanted to provide affordable health care for all Americans. That was a lie. After being elected, he tried to abolish Obamacare -- even though neither he nor congressional Republicans had a plan to replace it. Obamacare was saved by Senate Democrats and a handful of Republicans.

Failing to abolish Obamacare in Congress (and knowing he could never get it through the House since it is now controlled by Democrats), Trump has now decided to go to the courts. On Tuesday, he said he would become known as the "health care president". If he succeeds, it is more likely he will be known as the "death panel president".

Obamacare was signed into law in March of 2010. It wasn't perfect, but it did result in millions of Americans getting health insurance who could not get it before. It needs to be improved -- not abolished. But the Republicans (and Trump) don't care. For them, health care is not a right but a product to be sold to those who can afford it.

Abolishing Obamacare would mean millions of Americans could no longer afford health insurance. Millions more would be priced out of the market because of a pre-existing condition. Students would no longer be able to be on their parents insurance until age 26. Health insurance companies would be able to cap benefits and refuse to pay for medical care over a certain amount. Women would lose their right to free pregnancy prevention prescriptions. And insurance companies would no longer have to spend 80% of the premiums they receive on medical care.

Trump and his Republican cronies will tell you they will fix our broken health care system. They are lying. They've had nine years to come up with a better plan, and they haven't been able to come up with any plan at all! The only thing they will accomplish is to revert the health care system back to what it was before Obamacare -- a terrible system that kills far too many people unnecessarily.

The only upside to this action by the Trump administration that I can see is that he has handed Democrats a great issue for the 2020 campaign. Health care was an issue that helped Democrats take control of the House in 2018. Now it could help them to take the Seante and the White House in 2020.
Posted by Ted McLaughlin at 12:06 AM