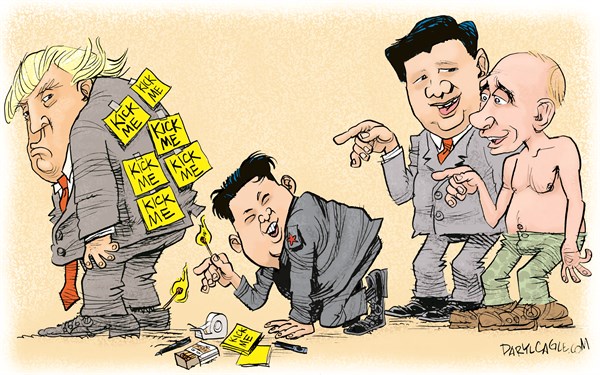 (Cartoon image is by Daryl Cagle at cagle.com.)

During the 2016 campaign, Donald Trump told Americans he would solve all the nation's problems because he was a "great negotiator". That was just another of his many lies. He has only one negotiating skill -- bullying. That may work against small businesses, but it doesn't work when dealing with other nation's -- especially dictators.

The truth is that Trump has failed at every one of his attempts to negotiate, and he failed again in Hanoi this week. Here's what the editorial board of The Washington Post had to say about it:


The failure of President Trump’s summit meeting with Kim Jong Un revealed the fundamental weakness of Mr. Trump’s strategy for addressing the growing nuclear threat from North Korea. The president supposed that his personal and improvisational diplomacy, featuring unwarranted and unseemly flattery of a murderous tyrant, would make possible the substantive steps toward disarmament that the regime has resisted for decades. Instead, he was presented by Mr. Kim with a patently unacceptable offer that left him no choice but to walk away.
It’s good that he did walk away, but Mr. Trump’s miscalculation leaves U.S.-North Korean relations in disarray, even as the regime continues to produce material for weapons and long-range missiles capable of striking the United States. It calls for a fundamental reshaping of the U.S. approach — one that is more realistic about the nature of the Kim regime, including its horrific human rights violations.
If the administration had pursued a more substantive approach to the negotiations, Mr. Kim would have known the position he brought to Hanoi was a non-starter. By Mr. Trump’s account, the 35-year-old ruler offered to shut down the North’s Yongbyon nuclear complex in exchange for the removal of all sanctions — something that would have left his regime in possession of other nuclear facilities, not to mention its existing arsenal. (North Korea says it asked for nullification of five U.N. resolutions that contain most, but not all, sanctions.) Pyongyang has twice before struck deals to close Yongbyon, only to renege. Even if its closure were guaranteed in this instance, it would fall far short of the minimum the United States should require for the lifting of sanctions.
Mr. Kim may have believed that he could bamboozle Mr. Trump, who at their last meeting abruptly agreed to suspend U.S. military exercises with South Korea in exchange for an ambiguous statement about denulearization. Since then, Mr. Trump has waved around flattering letters he received from Mr. Kim, spoken about falling in love with him and ceased U.S. efforts to call attention to the crimes against humanity Mr. Kim is credibly accused of. Meanwhile, international economic pressure on the regime eased.
Even after the summit’s failure, Mr. Trump persisted in sending the wrong messages. At a news conference in Hanoi, he cast doubt on the U.S. intelligence community’s assessment that North Korea is continuing to expand its nuclear arsenal and declined to say whether he would still demand complete denuclearization before lifting sanctions. He again questioned the costs of the U.S.-South Korean military alliance.
Worst of all, Mr. Trump offered Mr. Kim a pass on the case of American Otto Warmbier, saying he accepted the dictator’s word that he did not know about the gross mistreatment that led to Warmbier’s death. If Mr. Kim can obtain Mr. Trump’s sanction for such atrocities, it’s no wonder he would offer only one-sided deals.
Mr. Trump said Mr. Kim had assured him that North Korea would not return to nuclear or missile testing; if that remains true, there will still be time and opportunity for negotiation. But it ought now to be clear that the president’s shallow and slapdash attempts at dealmaking are not going to succeed.
Posted by Ted McLaughlin at 12:02 AM