The right-wing Republicans think they now have a Supreme Court that will overturn Roe vs. Wade, and outlaw abortion in the United States. But they would do good to consider what the public thinks about that. Here are 5 facts about the abortion debate in the United States from the Pew Research Center:

1. About six-in-ten U.S. adults (58%) said in a 2018 survey that abortion should be legal in all or most cases, compared with 37% who said it should be illegal all or most of the time. Public opinion on this question has been relatively stable over more than two decades of Pew Research Center polling, and there is little difference between the views of men and women. 3. When it comes to the Supreme Court’s landmark 1973 ruling, about seven-in-ten Americans (69%) said Roe v. Wade should not be completely overturned, according to a survey conducted in late 2016. Democrats were far more likely than Republicans to hold this view, and there were also significant differences by education level and religious affiliation. Nearly nine-in-ten of those with postgraduate degrees (88%) said the court should not overturn the decision, versus about seven-in-ten of those with a college degree (74%) or some college experience (70%) and 62% of those with a high school diploma or less education. There were no significant differences on this question by gender.

5.The vast majority of Americans expect abortion to remain at least mostly legal in the U.S. A survey conducted in December 2018 asked Americans what they think the status of abortion laws in the country will be in 2050; about three-quarters said it will either be legal with no restrictions (22%) or legal with some restrictions (55%). Far fewer said it will be illegal except in certain cases (16%) or illegal with no exceptions (5%). 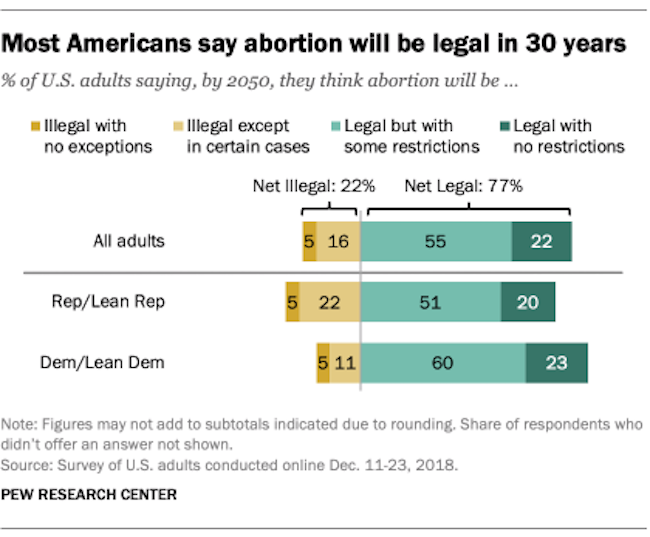