"Trickle-Down" Economics Started As A Joke - And It Still Is 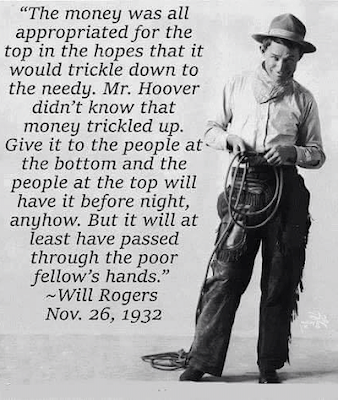 The Republicans have been conning the American people with their economic policy for a long time now.

The policy is commonly called "Trickle-Down" economic theory. It says that the way to a better economy for everyone is to give more to the rich. They say when the rich get more the money trickles down to everyone else.

This is a failed economic theory, and always has been. Nothing trickles down. The bank accounts of the rich just get fatter -- and the rest of America is left to suffer. Americans simply cannot feast on the table scraps left by the rich.

Now the International Monetary Fund (IMF) tells us what most of us already knew -- that trickle-down economic theory does not work. It actually has a negative effect on economic growth, while giving more to the poor and working classes has a positive effect.

Here is an excellent discussion on the failure of trickle-down policy by Jared Keller at the Pacific Standard website:


"Trickle-down" economics began as a joke. Seriously.
If there’s one person most often associated with the origins of of trickle-down economics, it’s President Ronald Reagan. Few people know, however, that the phrase was actually coined by American humorist Will Rogers, who mocked President Herbert Hoover’s Depression-era recovery efforts, saying that "money was all appropriated for the top in the hopes it would trickle down to the needy."
Rogers’ joke became economic dogma within two generations, thanks in large part to Reagan. At the center of Reagan’s economic doctrine was the idea that economic gains primarily benefiting the wealthy—investors, businesses, entrepreneurs, and the like—will "trickle-down" to poorer members of society, creating new opportunities for the economically disadvantaged to attain a better standard of living. Prosperity for the rich leads to prosperity for all, the logic goes, so let’s hurry up with those tax cuts already. The legacy of Reaganomics continues to shape modern debates over macroeconomic policy in the United States, from the Bush tax cuts of the mid-2000s to the deficit hawks waging war over the federal budget in Congress.
Now, nearly 80 years later, Rogers’ quip is getting the punchline it deserves: A devastating new report from the International Monetary Fund has declared the idea of "trickle-down" economics to be as much a joke as he'd imagined.
The IMF report, authored by five economists, presents a scathing rejection of the trickle-down approach, arguing that the monetary philosophy has been used as a justification for growing income inequality over the past several decades. "Income distribution matters for growth," they write. "Specifically, if the income share of the top 20 percent increases, then GDP growth actually declined over the medium term, suggesting that the benefits do not trickle down."
This should shock no one: Observers of income inequality over the past five years (especially those fond of Thomas Piketty’s Capital in the Twenty-First Century) will recognize this trend from economic data going back to the end of World War II. Consider this much-cited chart by Pavlina R. Tcherneva, of the Levy Economics Institute, tracking the distribution of income gains during periods of economic expansion: 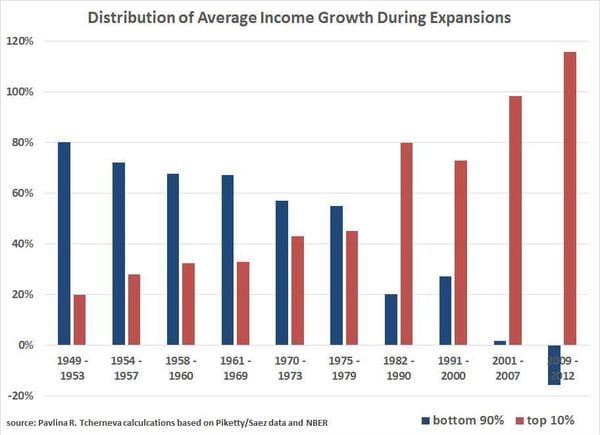 According to Tcherneva's analysis, the balance in the distribution is flipped from the majority of the nation to the top 10 percent during the Reagan and Bush administrations, a rapid acceleration of a gradual trend. Income inequality was already growing in the U.S., but the advent of Reaganomics kicked the trend into overdrive.
Or consider this chart from the Economic Policy Institute, which shows that, in general, the top one percent of society derives an increasing portion of income gains from existing capital and wealth: 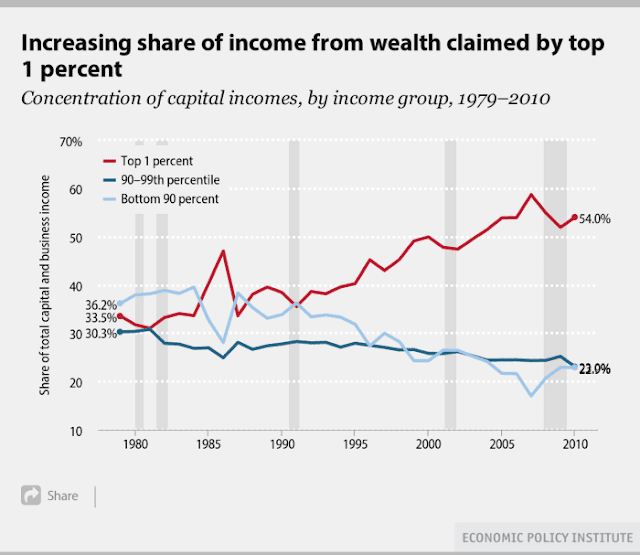 One last chart, this one from the Economist, based on data from Emmanuel Saez of the University of California-Berkeley and Gabriel Zucman of the London School of Economics, shows how wealth has become increasingly concentrated in the hands of the super-rich:

According to the IMF, countries looking to boost economic growth should concentrate their efforts on the lower segments of society rather than bolstering so-called "job creators" with tax breaks. The study results suggest that raising incomes for the poor and middle class yields measurable improvements to the national economy: Increasing the income share to the bottom 20 percent of citizens by a mere one percent results in a 0.38 percentage point jump in GDP growth. By contrast, increasing the income share of the top 20 percent of citizens yields a decline in GDP growth by 0.08 percentage points.
It’s not just the IMF making the case against trickle-down economics: As Quartz notes, the Organisation for Economic Co-operation and Development recently published a strong case for fighting income inequality, asserting that economic growth "is most damaged by the effects of inequality on the bottom 40% of incomes," Quartz's Gabriel Fisher writes.
The message of the IMF report is clear: Income and wealth inequality isn’t a class problem, but a national issue. "Widening income inequality is the defining challenge of our time," the authors of the report write. "The poor and the middle class matter the most for growth via a number of interrelated economic, social, and political channels." While disciples of Reaganomics may be clenching their fists, Will Rogers is probably laughing from the grave.
Posted by Ted McLaughlin at 12:02 AM