Democrats Need To Do The RIGHT Thing - Not The POLITICAL Thing - Start Impeachment Proceedings Now! 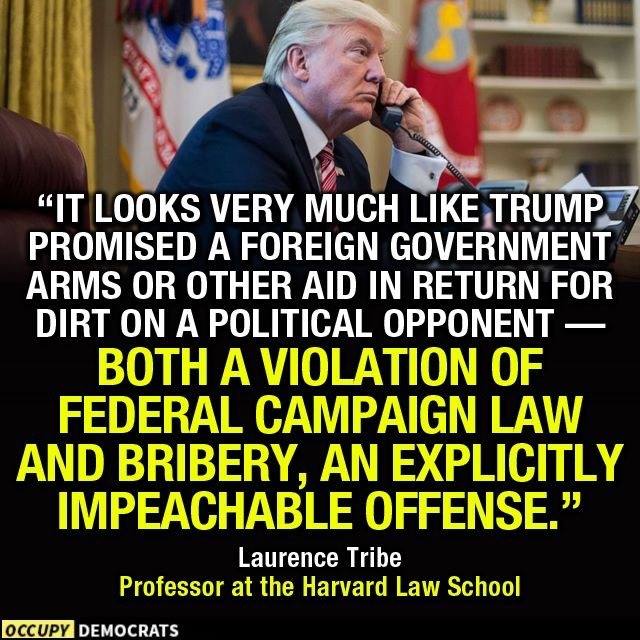 Anyone who has been paying attention has to know that Donald Trump has broken the law, and he should be impeached and removed from office. He colluded (conspired) with Russia to subvert the 2016 election, and he committed at least half a dozen acts of obstruction of justice in trying to kill the Mueller investigation. This was all after violating campaign finance law by paying off a woman he had sex with to protect his presidential candidacy.

Any of those things individually is worthy of impeachment. And I have been very disappointed in most Democratic members of the House of Representatives (including Speaker Pelosi) for their refusal to start impeachment proceedings.

I understand why the Republicans defend Trump. They put their party and their own political futures above the Constitution and their country. But Democrats are supposed to be better than that.

We've heard Democrats say it would be futile to impeach Trump because the Senate Republicans would protect him. That's a terrible excuse. They weren't elected to just do what Republicans allow them to do. They were elected to do the right thing for their country.

We've also heard that starting impeachment proceedings might hurt Democrats in the 2020 election. Another terrible excuse. They weren't elected to protect their own political futures (as Republicans do). They were elected to do the right thing for their country. And personally, I think it would not hurt their chances in 2020 -- voters like to see their politicians have the courage to do the right thing (even when they don't necessarily agree with it).

Now we find out that Trump continues to break the law, and shame the office of the presidency. He has tried to extort the government of Ukraine to find (or invent) some dirt on Joe Biden (who could be his opponent in the general election in 2020), by threatening to withhold money budgeted by Congress to help defend Ukraine. Using the government for his personal benefit is definitely worthy of impeachment, and we have waited long enough.

Democrats must do the right thing! Enough is enough! Impeachment proceedings must be started immediately!
Posted by Ted McLaughlin at 12:04 AM