Pence Shows Himself To Be A Sycophant (Bigly) 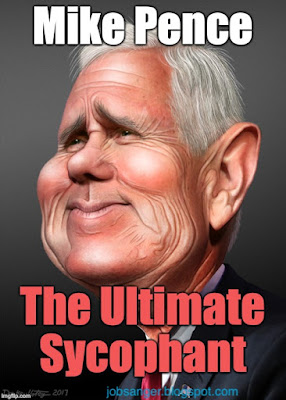 There is no shortage of sycophants in the Trump administration. Trump can't stand to be corrected, or disagreed with, so he quickly gets rid of people who have a real opinion.

But there is one member among the administration's sycophants that stands out from the pack -- Mike Pence. Pence will happily cover for any of Trump's lies, and he'll do it with gusto. For him, Trump can't do or say anything wrong.

And that's not all he'll do to bend to Trump's will. He just visited Ireland -- and he stayed at a hotel nearly 200 miles from the meetings he had scheduled with Irish officials. Why? Because that was the closest Trump-owned hotel in Ireland (and his sycophancy wouldn't let him stay at a non-Trump hotel).


There is not a more oleaginous sycophant in President Trump’s inner circle than Vice President Pence. Ironically, the one person Trump cannot fire is also the one most prone to elaborate expressions of loyalty that would put North Korean leader Kim Jong Un’s courtiers to shame. Pence will defend any remark, make any argument and sacrifice any principle (e.g., support for federal law enforcement, get tough with dictators, free trade) to stay in Trump’s good graces.
Then it rose to a whole other level when he arranged to stay at his boss’s resort — hours from his arranged meetings in Ireland. This was not only a blatant example of Trump’s ability to induce members of his administration, members of his party and heads of state to stuff money into his pockets, but it put Pence in the position of participating into the great grifting enterprise. When caught and called out for this, the vice president argued that this was the only facility that could accommodate his large party in his family homestead (query why taxpayers had to foot the bill for a family reunion in the old country). Then, his chief of staff, Marc Short, let on that Trump “suggested” Pence stay there. Whoops!
The first rule of sycophancy is never reveal that the object of your sycophancy invited your tribute (financial or otherwise) — even when it is obvious in the case of Trump that he lives to induce (or invent!) praise from others. Doing so might make the object of your sycophancy seem, well, needy or even corrupt.
Sure enough, Trump disavowed any involvement — “It wasn’t my idea for Mike to go there. Mike went there because his family’s there. That’s my understanding.” — but did not deny outright dropping the suggestion.
A few questions, to say the least, remain: First, why hasn’t Short been fired if he didn’t misspeak and really did falsely accuse Trump of “suggesting” Pence visit the president’s Ireland golf resort? This seems like a very big screw-up, if you take the White House at its word.
Second, unless you’re on the White House payroll, a talk-radio or Fox News host, or a Trump cultist (but I repeat myself), you don’t actually believe Trump had nothing to do with this fiasco. That leaves open the question as to why Pence or Pence’s staff would ever put the vice president in this position. It does suggest that Pence is too dense even to be of use to Trump.
Third, one wonders what Nikki Haley, the former U.S. ambassador to the United Nations, is thinking. Having spontaneously denied rumors that she was angling for Pence’s job or had a feud with the vice president, she might consider putting out a statement denying any rumors that she has done anything remotely as stupid as publicly feathering the president’s nest.
Finally, in an effort to clean up the mess, Short told the Times that Pence would pay for all his family’s expenses. (What about staff, transportation and security?) Umm, I think this is worse given that Pence now has decided to write a check directly to his boss’s company. Haley might want to start practicing a stump speech and making a highlight reel of her time at the United Nations.
Posted by Ted McLaughlin at 12:02 AM