The 2 Scams That The Rich (& Media) Run On The Poor 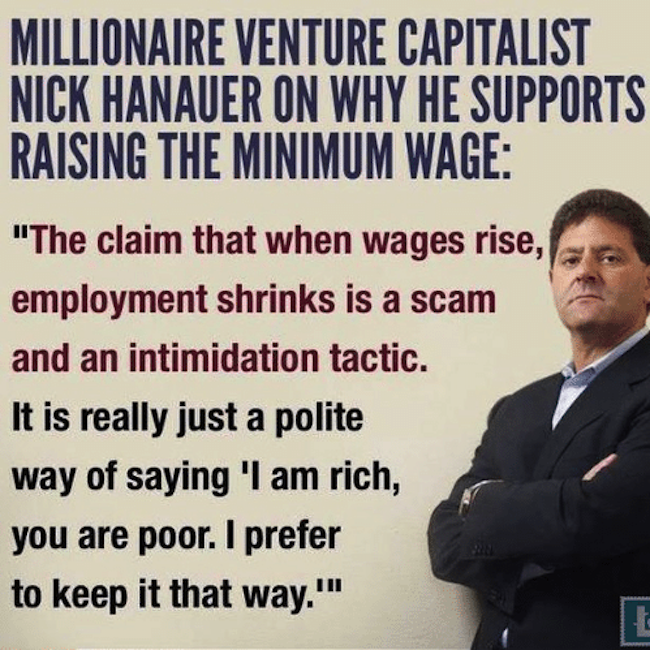 There are two major scams that the rich and corporations engage in to keep themselves on top, and the poor under their boot. One is the "trickle-down" economic theory, which says if you give more to the rich it will benefit everyone in the country. The second is the claim that raising the minimum wage will cost jobs in the economy. Neither is true, but the rich have convinced many Americans that they are, and they have been helped by the mainstream media (who either have been conned themselves, or are just parroting the corporate line).

Here's part of what venture capitalist Nick Hanauer has to say about these scams. He is one of the few rich people willing to tell you the truth.

In a first-of-its-kind study, economist William Lester from the University of North Carolina, in cooperation with researchers from the National Employment Law Project, pored over employment data from every federal increase since the minimum wage was first established, making “simple before-and-after comparisons of job growth trends twelve months after each minimum-wage increase.” And the paper’s title says it all: “Raise Wages, Kill Jobs? Seven Decades of Historical Data Finds No Correlation Between Minimum Wage Increases and Employment Levels.”

The results were clear: Of the nearly two dozen federal minimum wage hikes since 1938, total year-over-year employment actually increased 68 percent of the time. In those industries most affected by the minimum wage, employment increases were even more common: Fully 73 percent of the time in the retail sector, and 82 percent in low-wage leisure and hospitality. “[T]hese basic economic indicators show no correlation between federal minimum-wage increases and lower employment levels,” the authors write. In fact, if anything, the data suggest that increases in the federal minimum appeared to encourage job growth and hiring. Perhaps even more striking, of the only eight times total or industry-specific employment declined following a minimum wage increase, the U.S. economy was either already in recession (five times), technically just emerging from recession (twice), or about to head into a recession (once). Clearly, this handful of employment downturns would be better explained by the normal business cycle than by the minimum wage. “As those results mirror the findings of decades of more sophisticated academic research,” the authors conclude, “they provide simple confirmation that opponents’ perennial predictions of job losses are rooted in ideology, not evidence.” . . .

The claim that if wages go up, jobs go down isn’t a description of reality at all. Nor, in my opinion, does it reflect legitimate economics. It is a negotiating strategy. It is a scam, a con job, a threat—more precisely, it is an intimidation tactic masquerading as a legitimate economic theory. I believe this is where being a businessperson and not an economist leads to greater clarity. Very few economists have ever run a business or negotiated wages. But the first rule in the businessman’s handbook on wage negotiation and suppression is always, always, when they ask for a raise, threaten their jobs. It works like a charm, and has since the invention of capitalism. You see, the claim if wages go up, employment goes down isn’t made because it is true. It’s made because if people like me can get people like you to believe it is true, I’m going to get richer, and you are going to get poorer. The lower your wages are the higher my profits will be. It’s that simple. . . .


The two cornerstones of trickle-down economics are:
But this isn’t a scientific theory or a law of nature that describes the world in any empirically verifiable way. This is a threat—a moral claim aimed at social control. As such, it is repeated again and again and again, not because it is true, or because the powerful believe it to be true (although some might—self-deception can be a soothing psychic balm). The rich and the powerful relentlessly repeat this claim because if they can persuade the poor and the weak to believe it, it will be very advantageous to the powerful and the rich.
Trickle-down economics is about status, power, and economic privilege, not truth; and given what’s at stake, the people who benefit most from trickle down are desperate to maintain its ever more tenuous grip on the economic debate. You can see this desperation—you can all but smell it—in the breathless rhetoric spewing from the guardians of the economic elite: For example, the tortured math of the discredited American Enterprise Institute (new motto: “Lies, Damn Lies, and AEI”) or the contorted libertarian word jumble smeared across the pages of Forbes. Or on the opinion pages of The Wall Street Journal. For decades, these trickle-down apologists grew fat and lazy in the unchallenged sinecure of the dominant economic faith, leaving them totally unprepared for the speed at which the $15 heresy would take hold. And now, with each city or state that passes $15, the tighter the faithful cling to the old-time religion: “When you raise the price of employment, you get less of it,” they desperately preach. But while they have no empirical evidence to back up this claim, they sure have plenty of motive to believe it. Because if you think about it, you realize—they have to believe it.
That’s because trillions of dollars are at stake. Literally trillions. Thanks in part to this trickle-down scam, corporate profits’ share of the U.S. economy has grown from about 6 percent of GDP 40 years ago to about 12 percent today, while wages’ share of GDP has fallen by a comparable amount. That’s about a trillion dollars a year that used to go to wages that now go to profits. But if the 99 percent of Americans who have seen their real incomes stagnate or decline over the past couple decades came to realize that there really is no inevitable tradeoff between higher wages and jobs, then why wouldn’t they demand higher wages? Much higher wages? Much of which would come out of the windfall profits and giant bonuses of the people who fund AEI and read Forbes. Is it any surprise that these shameless propaganda mills would refuse to bend their “theory” to the facts?
But what is most dispiriting to me is the credulity of the broader media. They probably mostly believe that they are responsibly reporting the truth when they naively warn of the “job-killing risks” of raising wages. What they are actually doing is inadvertently bullying poor people on behalf of rich people. But I guess “risk” sells ads. So there is that.
The real threat to the opponents of the minimum wage posed by the fight for $15 isn’t that it would raise wages for nearly half of Americans (although it would certainly do that). It is that it exposes trickle-down economics for what it truly is—an intimidation tactic, a con job, a scam—a rhetorical negotiating strategy that has been deftly used to pick the pockets of American workers for the past 40 years. The opponents of a $15 minimum wage don’t oppose it because they are afraid it will harm the economy. They are terrified that it will help the economy, and by so doing, demolish a lie that has rationalized a set of economic policies that have suppressed the wages of tens of millions of Americans for decades. A $15 minimum wage won’t solve the enormous structural problems in the U.S. economy. But in lifting up our poorest workers and in opening the eyes of everyone else to the way in which they have been scammed, it would be a very good start.
Posted by Ted McLaughlin at 12:02 AM