Trump Is Not A Smart Man - He's A Conspiracy Believer! 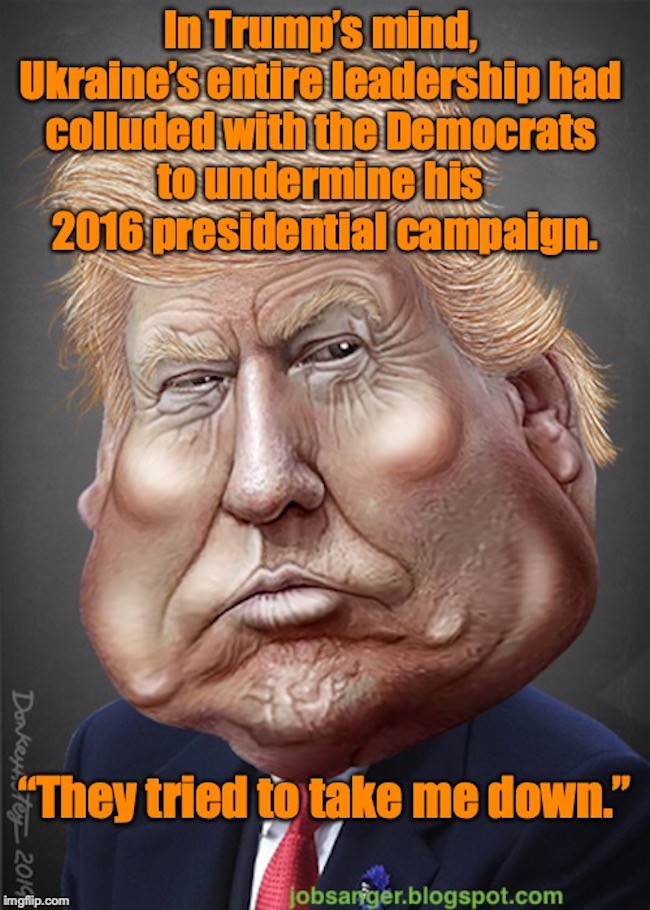 Much has been made of Trump cozying up to Russia while trying to extort Ukraine. Some have even said that Trump is a shrewd manipulator playing to the desires of his base. Unfortunately, that is not true. Trump is NOT a smart person. He is so ignorant that he actually believes in the conspiracy theories that he promotes.

All of our intelligence agencies know that Russia interfered in our 2016 presidential election, but Trump is still denying it. Instead, he believes that it was not Russia that interfered, but Ukraine -- and they did it to benefit the Democrats. Frankly, that's frightening -- that's he actually believes this nonsense.

Here's part of how Greg Jaffe and Josh Dawsey report this in The Washington Post:

Three of President Trump’s top advisers met with him in the Oval Office in May, determined to convince him that the new Ukrainian leader was an ally deserving of U.S. support.
They had barely begun their pitch when Trump unloaded on them, according to current and former U.S. officials familiar with the meeting. In Trump’s mind, the officials said, Ukraine’s entire leadership had colluded with the Democrats to undermine his 2016 presidential campaign.
“They tried to take me down,” Trump railed.
Energy Secretary Rick Perry, the senior member of the group, assured Trump that the new Ukrainian president was different — a reformer in Trump’s mold who had even quoted President Ronald Reagan in his inaugural address, for which the three advisers had been present.
But the harder they pushed in the Oval Office, the more Trump resisted.
“They are horrible, corrupt people,” Trump told them.
So far, a dozen witnesses have testified before House lawmakers since the closed-door impeachment inquiry began a month ago. One theme that runs through almost all of their accounts is Trump’s unyielding loathing of Ukraine, which dates to his earliest days in the White House.
“We could never quite understand it,” a former senior White House official said of Trump’s view of the former Soviet republic, also saying that much of it stemmed from the president’s embrace of conspiracy theories. “There were accusations that they had somehow worked with the Clinton campaign. There were accusations they’d hurt him. He just hated Ukraine.”
Posted by Ted McLaughlin at 12:02 AM