Warren's Transition Health Plan Shows She Is A Realist 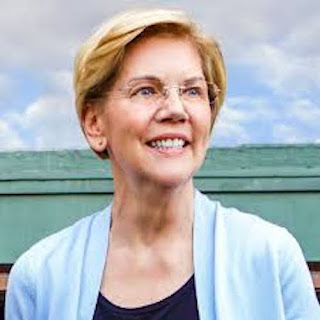 (This photo of Senator Elizabeth Warren is from her Facebook page.)

Make no mistake. Senator Elizabeth Warren wants the nation to have a single-payer government-run health insurance plan (commonly called Medicare-For-All). She truly believes that kind of plan will be the best for all Americans -- covering all citizens with decent insurance and lowering the cost of drugs and medical care.

But Warren is also a realist. She understands that a Medicare-For-All plan could not pass Congress right away if she's elected -- even with Democrats in control of both branches of Congress. Too many Americans get their private insurance through their employer, and they like the plan they have. A true Medicare-For-All plan could not be initiated until these people are convinced it would be better for them.

That does not mean that Obamacare could not be improved to cover all Americans and start to lower costs. In fact, most Americans would support a government public option for health insurance -- one that would cover anyone who can't afford private insurance and would allow any person to buy into the plan. And such a plan could be easily passed with a Democratic president and a Democratic-controlled Congress.

So Warren has made it clearer what she supports, and what she would try to achieve if she became president. She says she would first get a transition plan passed -- a public option that would cover those without insurance and that any American could buy into. She believes this step would convince most Americans that Medicare-For-All could work, and then it could be passed.

Here, from her website, is how she describes what she would do for health insurance if elected president:


Every serious proposal for Medicare for All contemplates a significant transition period. Today, I’m announcing my plan to expand public health care coverage, reduce costs, and improve the quality of care for every family in America. My plan will be completed in my first term. It includes dramatic actions to lower drug prices, a Medicare for All option available to everyone that is more generous than any plan proposed by any other presidential candidate, critical health system reforms to save money and save lives, and a full transition to Medicare for All.
Here’s what I'll do in my first 100 days:
By the end of my first 100 days, we will have opened the door for tens of millions of Americans to get high-quality Medicare for All coverage at little or no cost. But I won’t stop there. Throughout my term, I’ll fight for additional health system reforms to save money and save lives - including a boost of $100 billion in guaranteed, mandatory spending for new NIH research over the next ten years to radically improve basic medical science and the development of new medical miracles for patients.
And finally, no later than my third year in office, I will fight to pass legislation that would complete the transition to full Medicare for All. By this point, the American people will have experienced the full benefits of a true Medicare for All option, and they can see for themselves how that experience stacks up against high-priced care that requires them to fight tooth-and-nail against their insurance company. Per the terms of the Medicare for All Act, supplemental private insurance that doesn’t duplicate the benefits of Medicare for All would still be available. But by avoiding duplicative insurance and integrating every American into the new program, the American people would save trillions of dollars on health costs.
I will pursue each of these efforts in consultation with key stakeholders, including patients, health care professionals, unions, individuals with private insurance, hospitals, seniors currently on Medicare, individuals with disabilities and other patients who use Medicaid, Tribal Nations, and private insurance employees.
And at each step of my plan, millions more Americans will pay less for health care. Millions more Americans will see the quality of their current health coverage improve. And millions more Americans will have the choice to ditch their private insurance and enter a high-quality public plan. And, at each step, the changes in our health care system will be fully paid for without raising taxes one penny on middle class families.
Every step in the coming fight to improve American health care – like everyother fight to improve American health care – will be opposed by those powerful industries who profit from our broken system.
But I’ll fight my heart out at each step of this process, for one simple reason: I spent a lifetime learning about families going broke from the high cost of health care. I’ve seen up close and personal how the impact of a medical diagnosis can be devastating and how the resulting medical bills can turn people’s lives upside down. When I’m President of the United States, I’m going to do everything in my power to make sure that never happens to another person again.
Posted by Ted McLaughlin at 12:02 AM