Celebrate The Suffragette Heroes In This Centennial Year 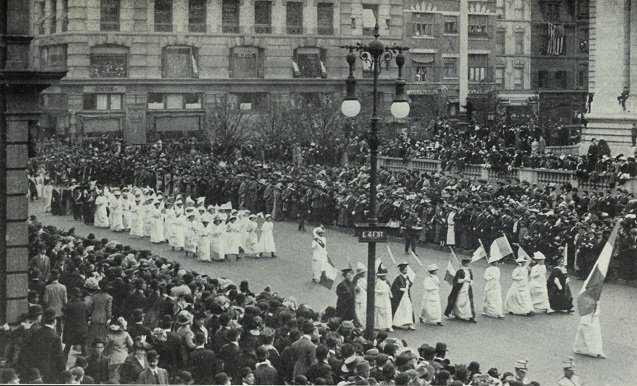 When our nation was founded in 1787, only men with property were allowed to vote. Women did not get the right to vote nationwide until 1920. This year marks the 100th year of women getting the right to vote. It's time to remember the heroes that accomplished that.

The article below was written by Linda Chapin in the Orlando Sentinel:

As we enter 2020, the 100th anniversary year of women’s suffrage, we must take time to recognize the courage and determination of those who led the long fight to achieve the right to vote for women in the United States.

With a few exceptions, notably among Native Americans and Quakers, women in early America knew their place. Sometimes they were treasured, sometimes taken for granted, but always they were second-class citizens, as Abigail Adams recognized when in 1776 she begged her husband, John, to “remember the ladies” in any new code of laws. It is reported that he laughed.

The movement that culminated a century ago began in the 1840s and, in its inception, focused primarily on the issue of slavery. The intense and principled women who would become the leaders of the effort to win the vote were first abolitionists. But when even that idealistic cause denied participation to women, Lucretia Mott and Elizabeth Cady Stanton vowed to start their own crusade.

Their small newspaper announcement of a meeting called for a gathering in Seneca Falls, New York, and the agenda set on July 19, 1848, would be one that preoccupied activist women for the next seven decades: the idea of freedom and voting rights for all.

Today, as we re-examine suffrage from a modern perspective, we also have an opportunity to correct the record with regard to the many strong and courageous women of color who played an important role.

The work of black suffragists has been little remembered and largely uncelebrated. We may know about Sojourner Truth and Harriet Tubman, but we need to hear much more about figures such as Ida B. Wells, an investigative reporter and suffragist who first led a crusade against lynching, and Josephine Ruffin, who created the first national newspaper for African-American women.

We also seek to dispel the popular perception that the suffragists were stern, stuffy, black-clothed matriarchs in outmoded bonnets. After all, the idea of women participating in the affairs of the nation was a truly radical one. And in the later years, when the decision was made to adopt more militant tactics than the unsuccessful lobbying and lecturing, the suffragists needed real courage to press the fight.

Susan B. Anthony was arrested and jailed after attempting to vote in 1872. And when women took to the streets in the thousands on the eve of World War I, they were attacked by mobs and hundreds were injured. In 1917, white-garbed “Sentinels of Liberty” picketed the White House and 500 women were arrested, with 168 thrown in jail, where hunger strikes were countered by feedings with tubes forced down the throats of resistant women.

Later that year came the infamous “Night of Terror.” Thirty-three women had been jailed for the crime of “obstructing sidewalk traffic.” And on Nov. 15, the warden of the prison gave tacit permission to guards to teach them a lesson. By the end of the night the women had been beaten, tortured and denied medical attention.

Ultimately, public outrage over this event was one element that led to a change in political attitudes. President Woodrow Wilson, formerly an opponent, was converted to the cause during the Great War and urged support: “We have made partners of the women in this war...Shall we admit then only to a partnership of suffering and sacrifice and toil and not to a partnership of privilege and right?”

The 19th Amendment, giving women full voting rights, was finally adopted by Congress on June 4, 1919. Fourteen months later, Tennessee became the 36th state to ratify the amendment (by a single vote) and it became law.

If you are a woman holding a job you enjoy, or owning property or managing a retirement portfolio, you owe these women a debt of gratitude. If you are the father, son, brother or friend of a woman for whom you want these things, you should join in the celebration of this important event, which helped to advance the “more perfect union” we all seek.
Posted by Ted McLaughlin at 12:02 AM