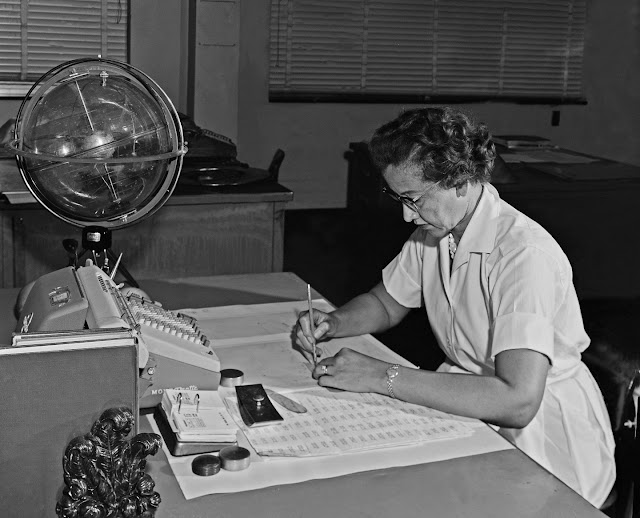 (This photo of Katherine Johnson in 1962 is from NASA.)

Most Americans probably don't know who Katherine Johnson is -- but they should. She is as responsible as anyone for the success of the American space program. She was a brilliant mathematician, and NASA depended on her computations before going ahead with any launches.

Katherine Johnson passed away on Monday (February 24th) at the age of 101. She was truly an American Hero.

Here is just a small part of Harrison Smith's excellent obituary for her in The Washington Post:

When Katherine Johnson ­began working at the National Advisory Committee for Aeronautics in 1953, she was classified as “subprofessional,” not far outranking a secretary or janitor.
Hers was a labor not of scheduling or cleaning but rather of mathematics: using a slide rule or mechanical calculator in complex calculations to check the work of her superiors — engineers who, unlike her, were white and male.
Her title, poached by the technology that would soon make the services of many of her colleagues obsolete, was “computer.”
Mrs. Johnson, who died Feb. 24 at 101, went on to develop equations that helped the NACA and its successor, NASA, send astronauts into orbit and, later, to the moon. In 26 signed reports for the space agency, and in many more papers that bore others’ signatures on her work, she codified mathematical principles that remain at the core of human space travel.
She was not the first black woman to work as a NASA mathematician, nor the first to write a research report for the agency, but Mrs. Johnson was eventually recognized as a pathbreaker for women and African Americans in the newly created field of spaceflight.
Like most backstage members of the space program, Mrs. Johnson was overshadowed in the popular imagination by the life-risking astronauts whose flights she calculated, and to a lesser extent by the department heads under whom she served.
She did not command mainstream attention until President Barack Obama awarded her the Presidential Medal of Freedom — the country’s highest civilian honor — in 2015. The next year, her research was celebrated in the best-selling book “Hidden Figures” by Margot Lee Shetterly and the Oscar-nominated film adaptation starring Taraji P. Henson, Octavia Spencer and Janelle Monáe.
Mrs. Johnson was “critical to the success of the early U.S. space programs,” Bill Barry, NASA’s chief historian, said in a 2017 interview for this obituary. “She had a singular intellect, curiosity and skill set in mathematics that allowed her to make many contributions, each of which might be considered worthy of a single lifetime.”
Posted by Ted McLaughlin at 12:02 AM