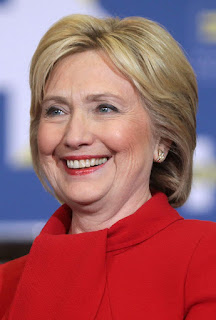 (The photo of Hillary Clinton, from Wikipedia, is by Gage Skidmore.)

In a podcast interview last Friday, Hillary Clinton had the following to say about Bernie Sanders and his followers:

I mean, you had, unfortunately, a very different outcome in the 2016 primary, where I won by four million votes. I won overwhelmingly in delegates. There was no question about who was going to be the nominee. But unfortunately, you know, his campaign and his principal supporters were just very difficult and really, constantly not just attacking me, but my supporters.

We get to the convention. They’re booing Michelle Obama, John Lewis. It was very distressing and such a contrast between what we did to unite in ’08.

All the way up until the end, a lot of people highly identified with his campaign were urging people to vote third party, urging people not to vote. It had an impact.

I think people need to have to really think hard about who can beat Trump. And it’s not the popular vote, as I learned to my own grave disappointment. . . So I just want us to be really focused on winning. That’s all I care about.
Posted by Ted McLaughlin at 12:02 AM