Majority Of Democrats Say Obama Has Endorsed Someone 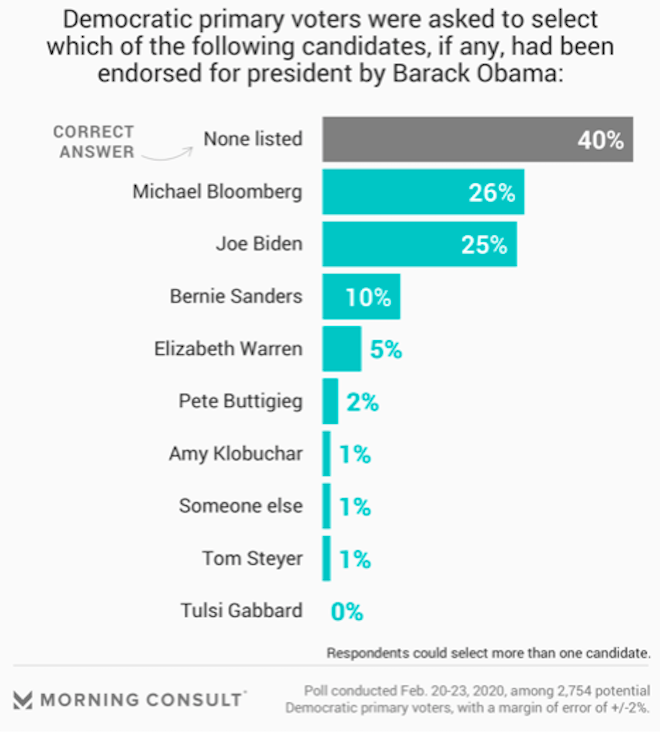 The chart above is from the Morning Consult Poll -- done between February 20th and 23rd of a national sample of 2,754 Democratic primary voters, with a 2 point margin of error.

It shows that about 60% of Democrats are sadly misinformed. They think President Obama has endorsed a candidate for the Democratic nomination for president.

About 26% think he has endorsed Michael Bloomberg. That's probably because Bloomberg has been running an ad showing Obama saying nice things about him. The problem is that Obama's remarks were from several years ago, and had nothing to do with this year's presidential race.

About 25% think he has endorsed Joe Biden. That's probably because he chose Biden to be his vice-president in 2008 and 2012, and it's obvious that the two men like and respect each other.

They are all wrong. President Obama has stayed out of the 2020 nominating race -- and he has made a point of NOT ENDORSING ANYONE! And it is very unlikely that he will not endorse until the convention chooses the nominee. Then I expect he will campaign hard for that nominee.
Posted by Ted McLaughlin at 12:04 AM