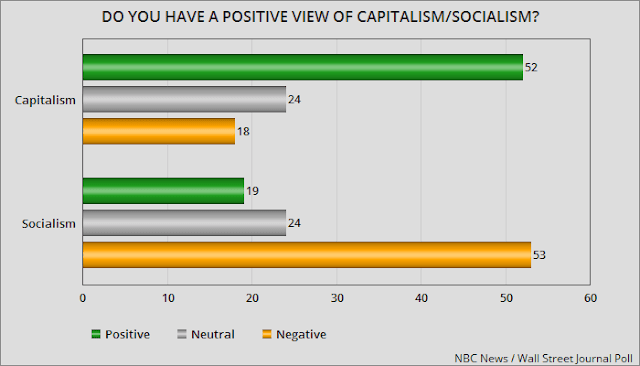 The chart above reflects the results of a recent NBC News / Wall Street Journal Poll -- done between January 26th and 29th of a national sample of 1,000 registered voters, with a 3.1 point margin of error.

It looks like Bernie Sanders may have done very well in the Iowa caucus, and a new Boston Globe Poll shows he has a slim lead in New Hampshire.

The problem, which should concern Democrats across the nation, is that Sanders has proudly called himself a socialist for most of his life. That's why he's the candidate that Donald Trump wants to run against.

The Republicans have access to many years of Sanders claiming to be a socialist, and you can bet they will be more than happy to use it against him in a general election. That's a problem. Note in the poll above that a majority of voters (53%) say they have a negative opinion of socialism. That's not surprising since the American public has been inundated with propaganda against socialism for decades (equating it with communism).

Steve Schmidt, a Trump opponent, recently said, "The sociopath will beat the socialist any day of the week, and twice on a Tuesday in November." I'm afraid he's right.

The Democrats have a plethora of good candidates that can beat Trump next November, but Sanders is not one of them. His past will bite him, and Trump would be re-elected.
Posted by Ted McLaughlin at 12:02 AM