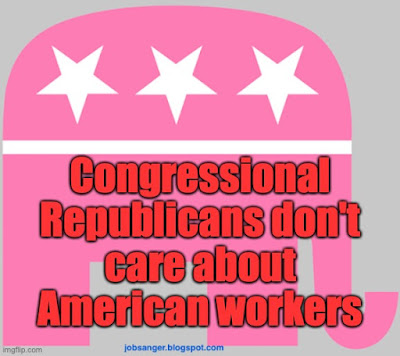 I'm not a fan of the Republicans in Congress. I believe they care only for the rich and corporations, and have very little respect for ordinary Americans -- especially those working for a living.

They have attacked labor unions, reducing their power to organize and protect workers. They have refused to raise the minimum wage of $7.25 an hour for years -- forcing many workers to live in poverty, even though they work hard in a full-time job. They gave the rich and corporations a huge tax cut, but gave workers next to nothing. And they have refused to provide decent health insurance -- leaving many workers with any health insurance at all.

Just recently, they provided more proof of their lack of concern and respect for workers.

Congress has known for months now that the enhanced unemployment benefits would end on July 31st. That benefit has kept millions of workers from dropping into abject poverty, and needs to be extended. The Democrats in the House did that, passing a second stimulus bill that would keep those benefits in place.

Republicans in the Senate have not. They waited until the last minute, and then came up with a pathetic plan that would reduce that from $600 to $200 -- but then reduce it to only 3/4 of a worker's salary as soon as they could verify that salary.

That is inadequate, and will force already underpaid workers to drop into poverty -- very possibly facing eviction and a struggle to feed their families. Then they compounded that disrespect for workers by including a provision that would grant businesses immunity that force workers back to work while the virus still rages. A worker that gets sick (or even dies) will not be able to sue the business that forced him/her back to work -- a "forced" is the correct term, since any workers refusing to return to his/her job would be ineligible for even the lower unemployment benefit.

Then, without passing any bill or negotiating with Democrats on a bill, the Senate Republicans recessed on Thursday for a long weekend -- knowing the enhanced unemployment benefits will expire days before they return. They don't care.

For the Republican officials, workers are no more than expendable bodies to be used to make sure the rich owners of corporations can continue to make massive profits. Providing workers with a livable wage, a safe working environment, and retirement protection (they also are working to cut benefits for Social Security, or eliminate it entirely) are not things the GOP cares about.

Republicans don't care about American workers, and they prove it every day. They must be voted out of power in November.
Posted by Ted McLaughlin at 12:08 AM