Is Donald Trump Ignorant Or Racist? - Probably Both! 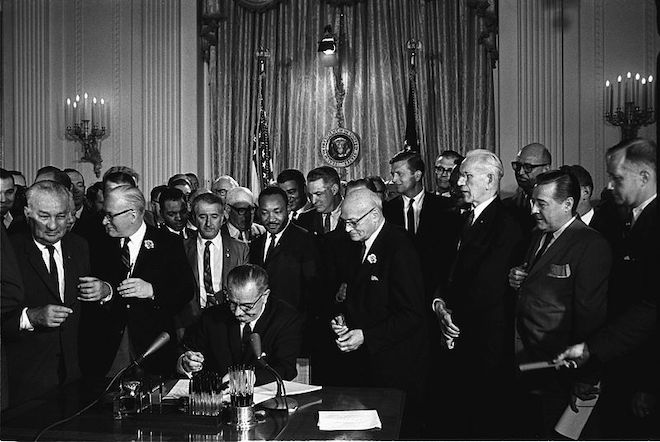 The following op-ed is by Jennifer Rubin in The Washington Post. She discusses Trump's ignorance/racism in his recent interview at Axios on HBO -- where he once again claimed to have done more for Blacks than any other president (and questioned the Civil Rights Act).

The Civil Rights Act of 1964 is widely viewed as one of the most consequential laws in the history of the republic. After overcoming filibuster attempts by white supremacists (I highly recommend Clay Risen’s magnificent telling of the law’s passage in “Bill of the Century"), it transformed society, integrating everything from schools to amusement parks to labor unions; banishing the “whites only” signs that Blacks had to endure since Reconstruction; requiring any entity receiving government funds to adhere to nondiscrimination requirements; and setting up the Equal Employment Opportunity Commission and the potential for civil suits. Even today, it continues to extend the blessings of equality in public accommodations, employment and education to all Americans — including the LGBTQ community, as Justice Neil M. Gorsuch recently wrote for the Supreme Court.

Yet when asked about the law in the disastrous interview with Axios’s Jonathan Swan, President Trump responded: “How has it worked out? If you take a look at what Lyndon Johnson did? How has it worked out?” When Swan followed up by asking if he thought the Civil Rights Act was a mistake, Trump deflected.

The most charitable explanation for this exchange is that nearly four years into his presidency, Trump remains almost entirely ignorant about U.S. history and law. He quite possibly has no idea or only a vague idea of what the Civil Rights Act is (let alone the 1965 Voting Rights Act or the 1968 Fair Housing Act). His vast ego combined with laziness and lack of intellectual curiosity prevent him from learning even basic information any informed citizen, let alone the president, should have mastered by high school.

The other possibility — consistent with his history of alleged housing discrimination in the 1970s; his call for the execution of the Central Park Five (and refusal to recognize their innocence after DNA evidence exonerated them); his resorting to birtherism; his comment about “very fine people” at violent rallies in Charlottesville, Va.; his remark about “shithole” countries; his defense of Confederate statues and of military bases named for traitorous generals; and his recent appeal to white fear of “low income” neighbors — is that he is a racist seeking to appeal to a racist base. From start to finish (I hope we are nearly at the end), this has been a president driven and defined by white supremacy and convinced the way to bind himself to supporters is by appeal to white grievance.

We can debate whether Trump is sui generis or simply the inevitable result of the “Southern strategy” (and its progeny in the “war on drugs” and mass incarceration). What is certain, however, is that Trump at the very least exposed the ugly underbelly of a segment of his party and of the country.

Like all authoritarian-minded leaders, Trump relies on disputing facts and warping history to cover himself in glory and avoid accountability for his serial disasters. In his telling, maybe only Abraham Lincoln was better for Blacks; the struggle for civil rights is airbrushed out of history; and he stands as the White savior of Black America. That is the monster the Republican Party lifted into office. He is the president whom elected GOP officials and intellectually corrupt pundits still support. If we are to recover our country and even our history, he must be banished to the dustbin of history.
Posted by Ted McLaughlin at 12:02 AM