Is It Important That Biden Choose A Black Woman As V.P.? 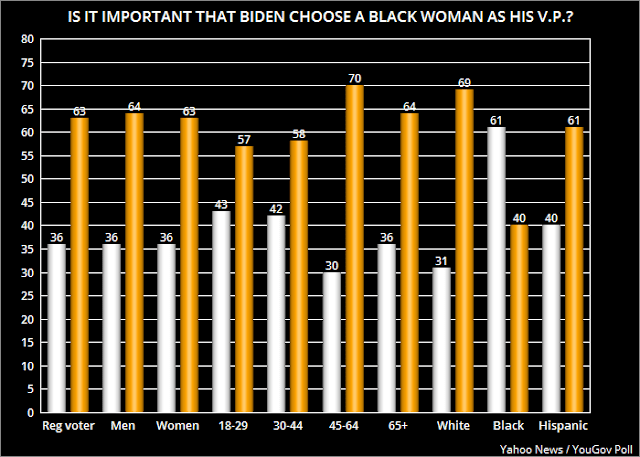 The chart above reflects the results of the Yahoo News / YouGov Poll -- done between July 28th and 30th of a national sample of 1,084 registered voters, with about a 3.3 point margin of error.

Democratic presidential candidate Joe Biden will be picking his vice-presidential running mate in the next couple of weeks. He has said he will choose a woman.

There are about 12 candidates getting serious consideration, and several of them are Blacks.

Personally, I like all 12 of those candidates, and I would happily support any of them. I would like to see a Black get the nod, but I doubt it's important. That's because this election doesn't hinge on Biden's choice. It didn't even hinge on who the Democratic candidate was.

I have said it before, and I still believe it -- this election is a referendum on Donald Trump. The voters  are deciding one thing -- to kick Trump out of the White House or allow him to stay. I don't think Biden's choice will make any difference in how the voters decide that question.
Posted by Ted McLaughlin at 12:06 AM