Could State GOP Legislatures Steal The Election For Trump? 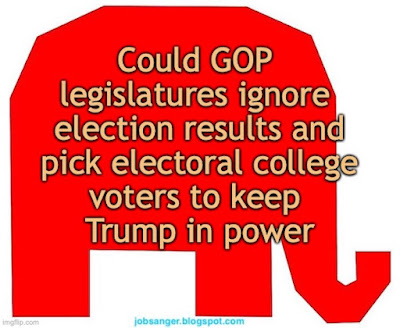 There's been some talk in the media about the possibility that Donald Trump could lose the election, but refuse to accept the results and refuse to leave office.

But there is a way Trump could lose the election and still remain in office. State legislatures determine how electoral college voters are picked, and some GOP state legislatures could ignore the voters and pick Trump electors.

I'd like to think that couldn't happen, but Republicans have shown us lately that they don't care about anything but trying to hang on to power. Morality, ethics, honesty, and rule of law mean nothing to them. If they see both houses of the U.S. Congress lost to Democrats, it's within the realm of possibility that they could override state voting results and move to pick electors that would keep a Republican in the White House.

Here's how Barton Gellman puts it in The Atlantic:

“We are accustomed to choosing electors by popular vote, but nothing in the Constitution says it has to be that way. Article II provides that each state shall appoint electors ‘in such Manner as the Legislature thereof may direct.’ Since the late 19th century, every state has ceded the decision to its voters. Even so, the Supreme Court affirmed in Bush v. Gore that a state ‘can take back the power to appoint electors.’ How and when a state might do so has not been tested for well over a century.”

“Trump may test this. According to sources in the Republican Party at the state and national levels, the Trump campaign is discussing contingency plans to bypass election results and appoint loyal electors in battleground states where Republicans hold the legislative majority. With a justification based on claims of rampant fraud, Trump would ask state legislators to set aside the popular vote and exercise their power to choose a slate of electors directly. The longer Trump succeeds in keeping the vote count in doubt, the more pressure legislators will feel to act before the safe-harbor deadline expires.”