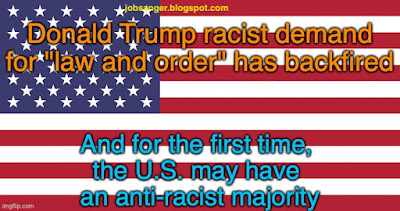 Donald Trump knows he's in trouble in the coming election. He's decided he can fix this by going back to his racism. To do that, he is using Nixon's thinly-veiled appeal for "Law and order". But it's not working.

Instead of dividing Whites and Blacks, it is causing them to unite in an effort to stop injustice -- at least to get police to stop killing unarmed Blacks. In fact, that backlash to Trump's racism may have given this country it's first anti-racist majority and set the country up for real reform.

Here is just a tiny part of a great article in The Atlantic by Adam Serwer:

After george floyd was killed, Donald Trump sensed an opportunity. Americans, anguished and angry over Floyd’s death, had erupted in protest—some set fires, broke the windows of department stores, and stormed a police precinct. Commentators reached for historical analogies, circling in on 1968 and the twilight of the civil-rights era, when riots and rebellion engulfed one American city after another. Back then, Richard Nixon seized on a message of “law and order.” He would restore normalcy by suppressing protest with the iron hand of the state. In return for his promise of pacification, Americans gave him the White House.

Surveying the protests, Trump saw a path to victory in Nixon’s footsteps: The uprisings of 2020 could rescue him from his catastrophic mishandling of the coronavirus pandemic. The president leaned into his own “law and order” message. He lashed out against “thugs” and “terrorists,” warning that “when the looting starts, the shooting starts.” Ahead of what was to be his comeback rally in Tulsa, Oklahoma, in June, Trump tweeted, “Any protesters, anarchists, agitators, looters or lowlifes who are going to Oklahoma please understand, you will not be treated like you have been in New York, Seattle, or Minneapolis”—making no distinction between those protesting peacefully and those who might engage in violence.

In this, Trump was returning to a familiar playbook. He was relying on the chaos of the protests to produce the kind of racist backlash that he had ridden to the presidency in 2016. Trump had blamed the 2014 protests in Ferguson, Missouri—a response to the shooting of Michael Brown by a police officer—on Barack Obama’s indulgence of criminality. “With our weak leadership in Washington, you can expect Ferguson type riots and looting in other places,” Trump predicted in 2014. As president, he saw such uprisings as deliverance.

Then something happened that Trump did not foresee. It didn’t work.

Trump was elected president on a promise to restore an idealized past in which America’s traditional aristocracy of race was unquestioned. But rather than restore that aristocracy, four years of catastrophe have—at least for the moment—discredited it. Instead of ushering in a golden age of prosperity and a return to the cultural conservatism of the 1950s, Trump’s presidency has radicalized millions of white Americans who were previously inclined to dismiss systemic racism as a myth, the racial wealth gap as a product of Black cultural pathology, and discriminatory policing as a matter of a few bad apples.

Those staples of the American racial discourse became hard to sustain this year, as the country was enveloped by overlapping national crises. The pandemic exposed the president. The nation needed an experienced policy maker; instead it saw a professional hustler, playing to the cameras and claiming that the virus would disappear. As statistics emerged showing that Americans of color disproportionately filled the ranks of essential workers, the unemployed, and the dead, the White House and its allies in the conservative media downplayed the danger of the virus, urging Americans to return to work and resurrect the Trump economy, no matter the cost.

Meanwhile, the state’s seeming indifference to an epidemic of racist killings continued unabated: On February 23, Ahmaud Arbery was fatally shot after being pursued by three men in Georgia who thought he looked suspicious; for months, the men walked free. On March 13, Breonna Taylor, an emergency-room technician, was killed by Louisville, Kentucky, police officers serving a no-knock warrant to find a cache of drugs that did not exist; months later, one of the officers was fired but no charges were filed. Then, on Memorial Day, the Minneapolis police officer Derek Chauvin kneeled on Floyd’s neck and ignored his many pleas for help. The nation erupted. According to some polls, more than 23 million people participated in anti-police-brutality protests, potentially making this the largest protest movement in American history. . . .

A June 2020 Monmouth University poll found increases across all races in the belief that law enforcement discriminates against Black people in the U.S. The same poll found that 76 percent of Americans considered racism and discrimination a “big problem”—up from 51 percent in 2015. In a Pew Research Center poll the same month, fully 67 percent of Americans expressed some degree of support for Black Lives Matter.

These numbers are even more remarkable when considered in historical context. In 1964, in a poll taken nine months after the March on Washington, where Martin Luther King Jr. gave his “I Have a Dream” speech, 74 percent of Americans said such mass demonstrations were more likely to harm than to help the movement for racial equality. In 1965, after marchers in Selma, Alabama, were beaten by state troopers, less than half of Americans said they supported the marchers. . . .

Trump bet his political fortunes on his assumption that the majority of white Americans shared his fears and beliefs about Black Americans. Trump did not anticipate how his own behavior, and the behavior he enabled and encouraged, would discredit the cause he backed. He did not anticipate that the activists might succeed in convincing so many white Americans to see the protests as righteous and justified, that so many white Americans would understand police violence as an extension of his own cruelty, that the pandemic would open their eyes to deep-seated racial inequities. . . .

A majority of Americans have accepted the diagnosis of Black Lives Matter activists, even if they have yet to embrace their more radical remedies, such as defunding the police. For the moment, the surge in public support for Black Lives Matter appears to be an expression of approval for the movement’s most basic demand: that the police stop killing Black people. This request is so reasonable that only those committed to white supremacy regard it as outrageous. Large majorities of Americans support reforms such as requiring the use of body cameras, banning choke holds, mandating a national police-misconduct database, and curtailing qualified immunity, which shields officers from liability for violating people’s constitutional rights.

There has never been an anti-racist majority in American history; there may be one today in the racially and socioeconomically diverse coalition of voters radicalized by the abrupt transition from the hope of the Obama era to the cruelty of the Trump age. All political coalitions are eventually torn apart by their contradictions, but America has never seen a coalition quite like this.