Is The Republican Party Being Destroyed By Donald Trump? 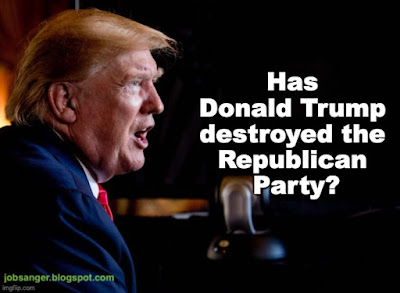 Several of Trump's opponents in the 2016 Republican primary warned voters that nominating Trump would be devastating for their party. Republicans nominated Trump anyway, and by a quirk of the electoral college, he became president.

But those opponents weren't wrong. It has just taken a bit longer than expected.

I recommend you read the entire editorial, but here is just a tiny part of what the editorial board of The New York Times has to say about Trump killing the Republican Party:

Of all the things President Trump has destroyed, the Republican Party is among the most dismaying.

“Destroyed” is perhaps too simplistic, though. It would be more precise to say that Mr. Trump accelerated his party’s demise, exposing the rot that has been eating at its core for decades and leaving it a hollowed-out shell devoid of ideas, values or integrity, committed solely to preserving its own power even at the expense of democratic norms, institutions and ideals.

Tomato, tomahto. However you characterize it, the Republican Party’s dissolution under Mr. Trump is bad for American democracy.

A healthy political system needs robust, competing parties to give citizens a choice of ideological, governing and policy visions. More specifically, center-right parties have long been crucial to the health of modern liberal democracies, according to the Harvard political scientist Daniel Ziblatt’s study of the emergence of democracy in Western Europe. Among other benefits, a strong center right can co-opt more palatable aspects of the far right, isolating and draining energy from the more radical elements that threaten to destabilize the system.

Today’s G.O.P. does not come close to serving this function. It has instead allowed itself to be co-opted and radicalized by Trumpism. Its ideology has been reduced to a slurry of paranoia, white grievance and authoritarian populism. Its governing vision is reactionary, a cross between obstructionism and owning the libs. Its policy agenda, as defined by the party platform, is whatever President Trump wants — which might not be so pathetic if Mr. Trump’s interests went beyond “Build a wall!”