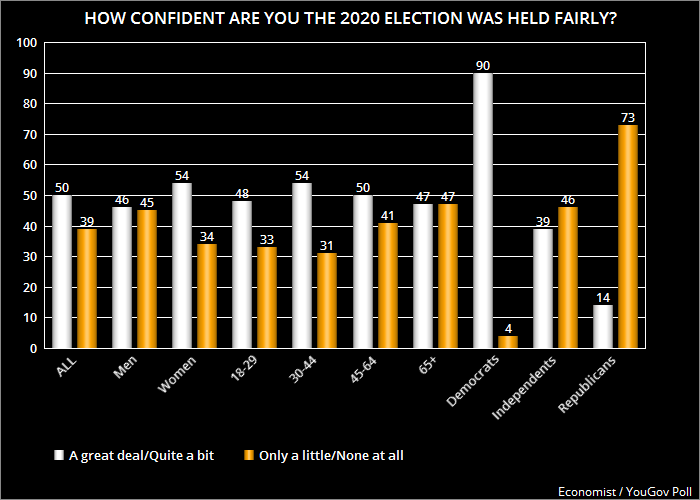 Donald Trump continues to rant that the election was rigged and rife with fraud -- and most elected Republican officials are remaining silent. They are afraid that Trump supporters will punish them in a future election if they tell the truth -- that the election was not rigged, voting machines did not malfunction, and there was no widespread fraud.

I think their silence is a huge mistake, and it's one that could hurt them in future elections. Note in the chart above that nearly 3 out of 4 Republicans (73%) believe what Trump is telling them. They do not think the election was fair.

If you thought elections were not held and counted fairly in this country, wouldn't that affect your choice of whether to vote or not? What's the point of voting if you think an election is rigged and has widespread fraud?

And it wouldn't take many Republicans staying at home on Election Day to make a big difference, especially in swing states. If only 5% or 10% decided their vote didn't matter since the election is rigged, that could help elect more Democrats in those swing states (and maybe even in some red states).

The chart above reflects the results of a recent Economist / YouGov Poll -- done between November 15th and 17th of a national sample of 1,500 registered voters, and has a 3.2 point margin of error.