It's Time To Stop The Domestic Terrorism Of The Far Right 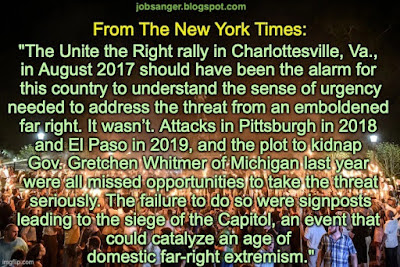 There were warning signs of a growing and dangerous domestic terrorism of the radical tight-wing. Sadly, it was ignored by our federal government. Republicans, knowing that most of those right-wing terrorists were Republican voters, blocked any effort to deal with the growing threat.

And it is a threat to this country -- it's citizens and its democracy. The insurrection by right-wing terrorist Trump supporters at the Capitol on January 6th made that very clear.

But the insurrection at the Capitol was just the latest in a long line of terrorist activity from the radical right. In the last few years, violence and terrorist acts from home-grown right-wingers was the most significant threat to this country -- a far larger threat that that from foreign terrorists. It is time for the federal government to act to curb this growing threat!

Consider the following, which is part of an op-ed by Colin P. Clarke in The New York Times:

The turbulence of the next several years should not be underestimated. Record-setting firearms sales, looming economic calamity and the continued fraying of America’s social fabric — exacerbated by declining mental health, rising domestic violence and worsening substance abuse during the pandemic — make for a worrying combination. . . .

Domestic far-right extremism is poised to become a more diverse phenomenon in 2021, bringing together white supremacists marching in crowds alongside conspiracy theorists, militias and other extremists motivated by gun culture and a deep hatred of government. With Mr. Trump no longer in office, a portion of his supporters are vulnerable to recruitment into more extreme networks and, potentially, white-supremacist and neo-Nazi organizations. These groups are energized and confident in their ability to co-opt militant Trumpists.

As a result, a larger segment of the far right could come to engage in racially and ethnically motivated violence. After the inauguration on Jan. 20, QAnon followers were apoplectic, with one lamenting, “We all just got played.” Sensing the disillusionment, white supremacists pounced, reaching out to disaffected QAnon adherents and urging one another to “heighten their burning hatred of injustice” to build rapport and accelerate the grooming process.

The Biden administration on Friday announced an initiative aimed at overhauling the government’s approach to domestic terrorism. It ordered intelligence agencies to conduct a comprehensive threat assessment of domestic violent extremism, and develop the capability to counter extremism and disrupt extremist networks in coordination with federal departments overseeing evolving terrorism threats.

It’s a step in the right direction. The administration should look to pass a bill similar to the now pending Transnational White Supremacist Extremism Review Act that seeks to direct the intelligence community to develop and disseminate a threat assessment on violent white-supremacist groups operating overseas, some of which may have connections to U.S.-based extremists. . . .

Lawmakers should also make domestic terrorism a federal crime. There are valid concerns about a domestic terrorism statute, including issues of free speech and assembly, and also the potential for abuse — corrupt politicians could use domestic terrorism designations against perceived political enemies. Transparency and oversight must be essential components of any new legislation.

Designating domestic terrorism as a federal crime would provide federal departments and agencies with more tools and resources to combat the threat. It would make reporting requirements for bias-motivated and hate crimes mandatory, which would provide more comprehensive data about incidents that may upon closer examination be racially or ethnically motivated. Further, it would allow federal agencies to disrupt extremist networks by investigating ancillary crimes like providing material support.

The Unite the Right rally in Charlottesville, Va., in August 2017 should have been the alarm for this country to understand the sense of urgency needed to address the threat from an emboldened far right. It wasn’t. Attacks in Pittsburgh in 2018 and El Paso in 2019, and the plot to kidnap Gov. Gretchen Whitmer of Michigan last year were all missed opportunities to take the threat seriously.

The failure to do so were signposts leading to the siege of the Capitol, an event that could catalyze an age of domestic far-right extremism.