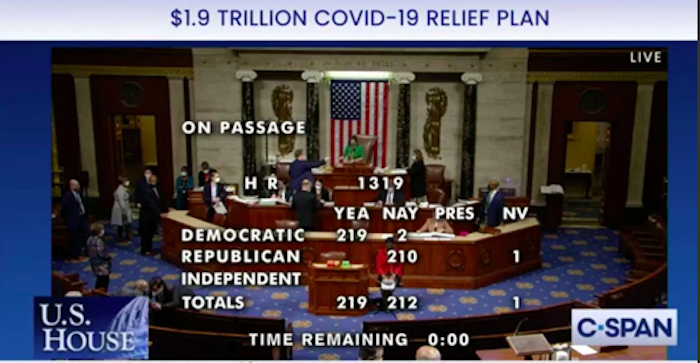 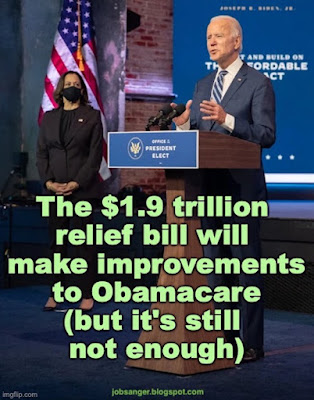 The House of Representatives has passed the $1.9 trillion relief bill proposed by President Biden. The bill now goes to the Senate, and can hopefully be implemented by March 14th (when expanded unemployment benefits run out).

The House bill contains everything President Biden wanted, but is likely to not include a minimum wage raise after it goes through the Senate. It will still have the $1400 checks for citizens, money to help state and local governments, money to help schools safely open, money for unemployment, money to help small businesses survive, and money to pay for COVID-19 testing and vaccination.

But the bill also contains something most Americans don't know about. It will contain some improvements for Obamacare. It won't solve our health insurance problem completely, but it will make it a little better.

It doesn't do enough though. Biden, and other Democrats, campaigned on providing a public option that will help all Americans get health insurance. They still need to follow through on that promise.

Here's part of how The New York Times is covering the bill's improvements to Obamacare:

Now the Biden administration and a Democratic Congress hope to engineer the first major repair job and expansion of the Affordable Care Act since its passage. They plan to refashion regulations and spend billions through the stimulus bill to make Obamacare simpler, more generous and closer to what many of its architects wanted in the first place.

The Affordable Care Act has expanded coverage to more than 20 million Americans, cutting the uninsured rate to 10.9 percent in 2019 from 17.8 percent in 2010. It did so by expanding Medicaid to cover those with low incomes, and by subsidizing private insurance for people with higher earnings. But some families still find the coverage too expensive and its deductibles too high, particularly those who earn too much to qualify for help.

Tucked inside the stimulus bill that the House passed early on Saturday are a series of provisions to make the private plans more affordable, at least in the short term.

The legislation, largely modeled after a bill passed in the House last year, would make upper-middle-income Americans newly eligible for financial help to buy plans on the Obamacare marketplaces, and would increase the subsidies already going to lower-income enrollees. The changes would last two years, cover 1.3 million more Americans and cost about $34 billion, according to the Congressional Budget Office.

For certain Americans, the difference in premium prices would be substantial: The Congressional Budget Office estimates that a 64-year-old earning $58,000 would see monthly payments decline from $1,075 under current law to $412 with the new subsidies.

It was a blow to Obamacare’s authors when the Supreme Court allowed states to refuse to expand Medicaid, the health law’s primary tool for bringing comprehensive coverage to poor Americans. Multiple states have joined the expansion in recent years, some via ballot initiative, but some Republican governors have steadfastly rejected the program, resulting in two millionuninsured Americans across 12 states.

The stimulus package aims to patch that hole by increasing financial incentives for states to join the program. Though Democrats are offering holdout states larger payments than they’ve contemplated in the past, it’s unclear whether it will be enough to lure state governments that have already left billions on the table. Under current law, the federal government covers 90 percent of new enrollees’ costs. . . .

But the Biden health project still faces challenges, and it may disappoint his allies. The new proposed spending, which would bring the law’s subsidies in line with early drafts of the Affordable Care Act, is temporary. Making those changes permanent could cost hundreds of billions over a decade, a sum that may spook moderate Democrats once the economy is in better health.

And for many Democrats, the overhauls do not go as far they had hoped. Mr. Biden ran not only on subsidy expansions and technical fixes, but also on a lowering of the Medicare eligibility age and the creation of a so called public-option plan, government insurance that people could choose in place of private coverage.