Elizabeth Warren Calls For An End To The Senate Filibuster 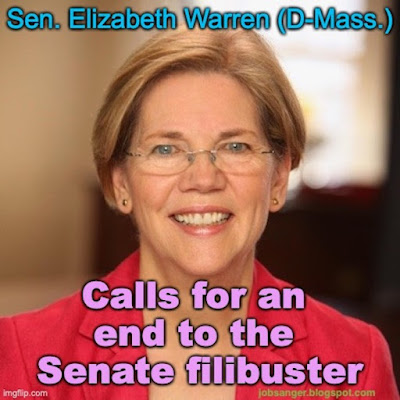 It has become obvious that the Senate Republicans are going to block everything the Biden administration tries to do. Their idea of "bipartisanship" is for everyone to agree with them. That's not going to work.

The tool they are going to use to block anything proposed by President Biden (or congressional Democrats) is the filibuster. It is time to eliminate that archaic filibuster rule in the Senate. If we don't, we are looking at another two years of gridlock.

Senator Elizabeth Warren (D-Massachusetts) knows this, and she is calling for an end to the Senate filibuster.

Here is what she wrote to her supporters:

It's a broadly popular, badly needed policy to help families who are struggling through this pandemic and lift people out of poverty.That's why President Biden included this plan in his COVID relief package. That's why the House of Representatives put it in their bill, too. That's why the Senate needs to take action.But right now, raising the minimum wage is getting bogged down in the Senate. Why? Because of the filibuster — a procedural loophole that lets an extreme minority of senators block the majority from passing bills that have the broad support of the American people.Understand this: The filibuster is giving a veto to Mitch McConnell. A veto to the gun industry. A veto to the oil industry. For generations, racist senators took advantage of the filibuster to block anti-lynching laws and civil rights bills. And it's still blocking progress today. Unless we get rid of the filibuster, the Republican Senate minority will be able to keep using their favorite word — "no" — to block so many things we need to get done. "No" to protecting the right to vote. "No" to rooting corruption out of Washington. "No" to commonsense gun safety reform. "No" to raising the minimum wage for the first time in over a decade.Raising the minimum wage would increase income for about thirty million and lift nearly a million families out of poverty. It would help boost income for people of color, who make up a disproportionate share of low-wage earners. It would give workers more money in their pockets to put back into the economy — lifting all boats. It would help our country build back better, stronger, and more resilient.The American people elected a Democratic House majority, a Democratic Senate majority, and a Democratic president with a mandate to take bold action. Now, we need to deliver results — and that means getting rid of the filibuster. Elizabeth
Posted by Ted McLaughlin at 12:02 AM