Minimum Wage Raise Is Dead (And GOP Is Rejoicing) 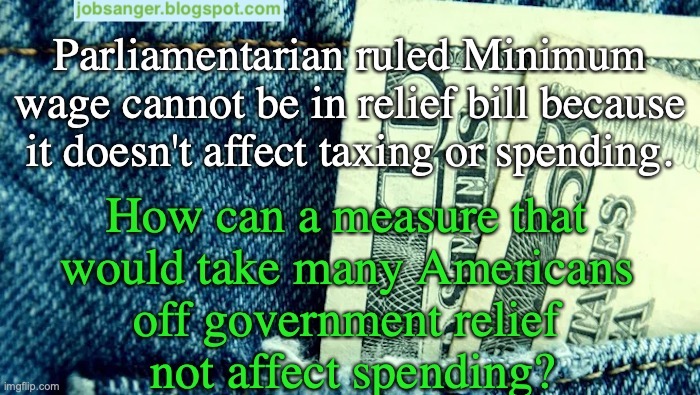 Our economy was already in trouble before the pandemic hit this country. While the rich were getting richer, the working and middle classes were struggling to stay up with inflation. And the gap between the wealth and income of the top 1% and the bottom 90% was larger than before the Great Depression, and it was continuing to grow.

The pandemic just made things even worse. The rich kept on getting richer, while millions lost their jobs.

The biggest thing to correct the economy, and make it fairer for everyone, would be to raise the minimum wage to $15 an hour. The relief bill proposed by President Biden included that minimum wage. The bill would not only provide money necessary to fight the Coronavirus, but would start putting the U.S. economy back on track. Unfortunately, that is not going to happen now.

The Democrats were trying to pass that relief bill by using the reconciliation process. A Senate rule says that process can only be used for items that involve taxing and spending. And on Thursday, the Senate Parliamentarian ruled that the provision to raise the minimum wage did not meet that criteria -- and therefore could not be included in the bill.

Frankly, I don't understand that ruling at all. Raising the minimum wage to $15 an hour would affect both taxing and spending. Many of those receiving the raise would start paying taxes (which they don't do now because they live in poverty), and many (perhaps millions) would no longer qualify for government benefit programs (food stamps, etc.) which would affect government spending in a positive way.

This means there will be no minimum wage raise for the next two years. That's because the Republicans, while they don't control the Senate, have enough votes to kill any attempt by filibustering it to death. It would take 60 votes to pass a minimum wage bill in the Senate, which means at least 10 Republicans would have to support it. That is simply not going to happen, because there are 10 Republican senators that give a damn about workers.

Meanwhile, the Biden administration has provided its first disappointment. It is going to wimp out and accept defeat. Senate experts say Vice-President Kamala Harris could overrule the Senate Parliamentarian and keep the minimum wage proposal in the bill -- but the administration has signaled that it will accept the ruling. They are afraid the relief bill would not pass the Senate with the minimum wage proposal in it.

President Biden says he still supports the $15 an hour minimum wage and will continue to fight for it.

Sadly, those just sound like empty and meaningless words now.

Even sadder is that the American public supports raising the minimum wage to $15 an hour. Note the chart below, which reflects the results of the new Economist / YouGov Poll -- done between February 19th and 22nd of a national sample of 1,500 adults (including 1,201 registered voters). The margin of error for adults is 2.7 points, and for registered voters is 3.0 points. 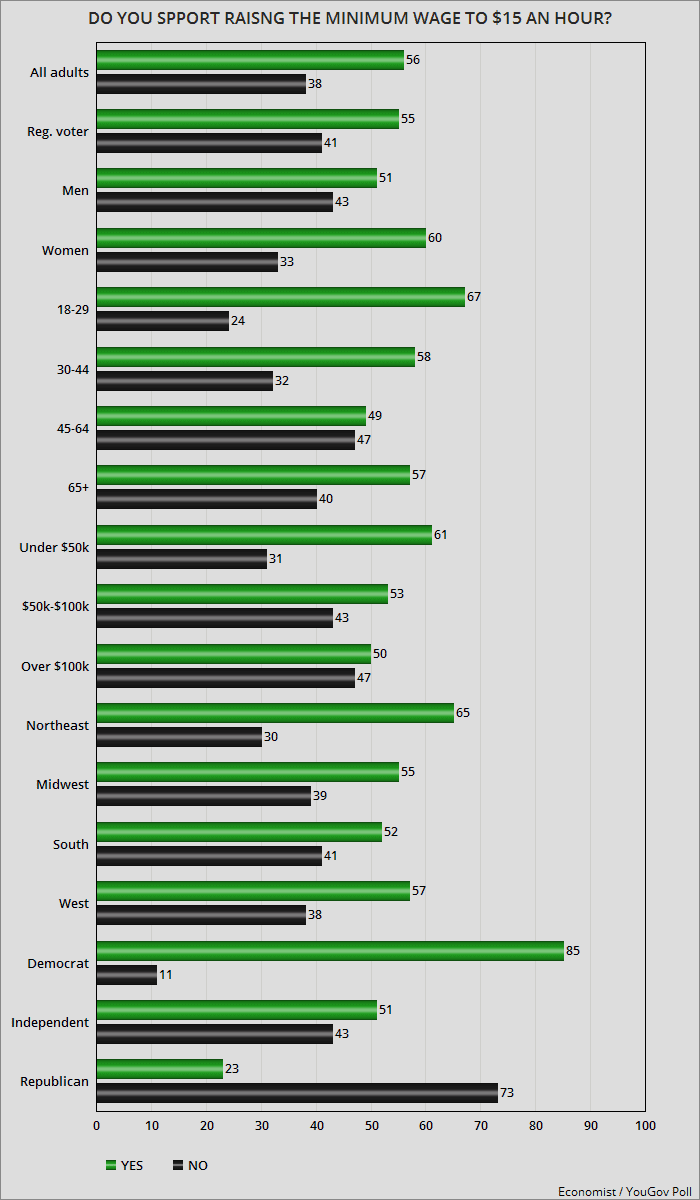