The Republican Party Has Become The Cult Of Trump 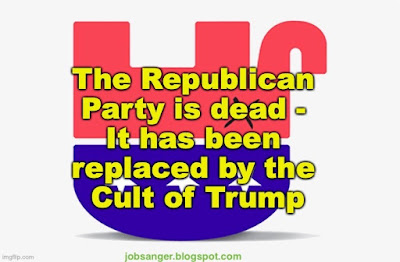 We used to have two major political parties in this country -- the conservative Republican Party and the liberal Democratic Party.

They were not enemies, even though they pursued different economic goals. They talked to each other, and debated the important issues facing the country. And then they negotiated to find compromises that moved the country forward.

This is the way it must be in a democracy. At least two parties are needed to prevent either party from making a mistake in their passion for their beliefs. Throughout our history this has worked well to preserve our democracy and solve our problems.

Unfortunately, that is no longer true. The Republican Party has died --  or at least is critically ill and unable to act like a true political party. It has been taken over by racists, white supremacists, religious bigots, and conspiracy theorists. And those people have only one true belief -- supporting Donald Trump and his lies.

They even said as much in their 2020 political convention. Instead of writing a party platform, they simply stated that their party believed whatever Donald Trump wanted to do was what they want.

They are no longer a Conservative party. Trump has tossed many conservative values under the bus, and that is OK with the members. They no longer believe in free trade, but have accepted Trump trade war tariffs. They no longer believe in democracy, but are willing to overturn the results of a democratic election. In fact, they only have one value -- loyalty to Trump. They have truly become the Cult of Trump.

This is bad, because Trump sees the country (and world) as peopled only by friends and enemies. The friends are those who praise him and show loyalty (regardless of what he might do). The enemies are those who dare to speak the truth. And he will not negotiate with those he considers an enemy.

That means the elected officials in his cult cannot negotiate either. Whatever Democrats want, or try to do, they must oppose it. They call for bipartisanship, but for them that means surrender to whatever they want.

I have never voted for a Republican, and disagree with the policies they used to have. But they performed a valuable function in our democratic form of government. We need them. Sadly, I don't know if the party can survive its current illness. I hope it can. Our democracy cannot survive without two viable parties.