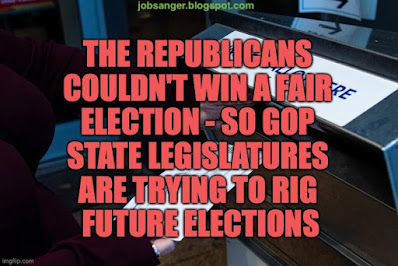 The Republican Party doesn't believe in democracy, and they haven't believed in it for quite a while.

They lost the last presidential election by more than 7 million votes. A party that believes in democracy would alter their policies to reflect those the voters want. But the GOP is not doing that.

Instead they are trying to rig future elections so they can return to power. They don't care what the voters want. They only care about seizing and remaining in power -- and for them that means changing the rules to keep millions of people from exercising their right to vote. And that have a whole bag of dirty tricks to accomplish that.

The following is part of an article by Michael Wines in The New York Times on the nasty GOP efforts:

Led by loyalists who embrace former President Donald J. Trump’s baseless claims of a stolen election, Republicans in state legislatures nationwide are mounting extraordinary efforts to change the rules of voting and representation — and enhance their own political clout.

At the top of those efforts is a slew of bills raising new barriers to casting votes, particularly the mail ballots that Democrats flocked to in the 2020 election. But other measures go well beyond that, including tweaking Electoral College and judicial election rules for the benefit of Republicans; clamping down on citizen-led ballot initiatives; and outlawing private donations that provide resources for administering elections, which were crucial to the smooth November vote.

And although the decennial redrawing of political maps has been pushed to the fall because of delays in delivering 2020 census totals, there are already signs of an aggressive drive to further gerrymander political districts, particularly in states under complete Republican control.

The national Republican Party joined the movement this past week by setting up a Committee on Election Integrity to scrutinize state election laws, echoing similar moves by Republicans in a number of state legislatures.

Republicans have long thought — sometimes quietly, occasionally out loud — that large turnouts, particularly in urban areas, favor Democrats, and that Republicans benefit when fewer people vote. But politicians and scholars alike say that this moment feels like a dangerous plunge into uncharted waters.

The avalanche of legislation also raises fundamental questions about the ability of a minority of voters to exert majority control in American politics, with Republicans winning the popular vote in just one of the last eight presidential elections but filling six of the nine seats on the Supreme Court.

The party’s battle in the past decade to raise barriers to voting, principally among minorities, young people and other Democrat-leaning groups, has been waged under the banner of stopping voter fraud that multiple studies have shown barely exists.