Having More Choices Is Not Always A Good Thing 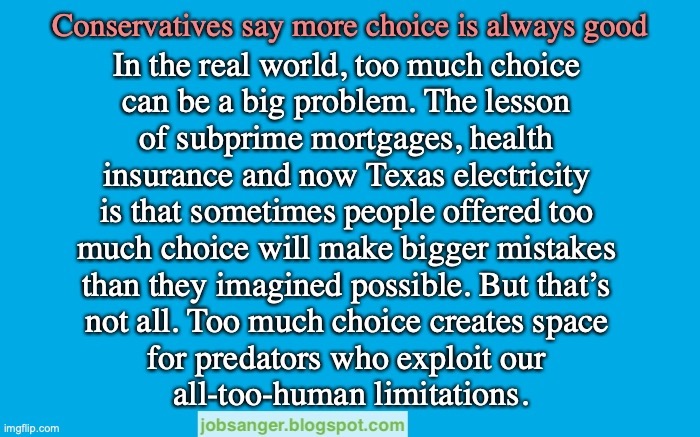 Conservatives love to say that having more choices is always a good thing. That's not always true, especially if some of those choices are designed to bilk consumers of their hard-earned money. Consider this article from Nobel Prize economist Paul Krugman:

Dan Patrick, the lieutenant governor of Texas, is clearly what my father would have called a piece of work.

Early in the pandemic he made headlines by saying that older Americans should be willing to risk death so that younger people could “get back to work.” More recently, he suggested that Texans who found themselves with $17,000 electricity bills after the February freeze had only themselves to blame, because they didn’t “read the fine print.”

Funny, isn’t it, how politicians who denounce liberal elitists sneer when ordinary Americans get into trouble?

But something else struck me about Patrick’s take on supersize power bills: How did we become a country where families can face ruin unless they carefully study something as mundane, as normally routine, as their electricity contract?

And electricity isn’t a unique example.

As The Times’s Margot Sanger-Katz has documented, many people end up with heavy financial burdens because they chose the wrong health insurance plan — yet even experts have a very hard time figuring out which plan is best. Using an out-of-network health care provider can also lead to huge medical bills.

Wait, there’s more. One cause of the 2008 financial crisis was the proliferation of novel financial arrangements, like interest-only loans, that looked like good deals but exposed borrowers to huge risks.

What these stories have in common is that they’re snapshots of a country in which many of us are actually offered too many choices, in ways that can do a lot of harm.

It’s true that both Economics 101 and conservative ideology say that more choice is always a good thing. Milton Friedman’s famous and influential 1980 TV series extolling the wonders of capitalism was titled “Free to Choose.”

The spread of this ideology has turned America into a land where many aspects of life that used to be just part of the background now require potentially fateful decisions. You don’t get a company pension, you have to decide how to invest your 401(k). When you turn 65, you don’t just get put on Medicare, you also decide which of many Medicare Advantage plans to sign up for. You don’t just get power and phone service, you also have to choose from a wide variety of options.

Some, maybe even most, of this expansion of choice was good. I don’t miss the days when all home phones were owned by AT&T and customers weren’t allowed to substitute their own handsets.

But the argument that more choice is always good rests on the assumption that people have more or less unlimited capacity to do due diligence on every aspect of their lives — and the real world isn’t like that. People have children to raise, jobs to do, lives to live and limited ability to process information.

And in the real world, too much choice can be a big problem.

The lesson of subprime mortgages, health insurance and now Texas electricity is that sometimes people offered too much choice will make bigger mistakes than they imagined possible. But that’s not all. Too much choice creates space for predators who exploit our all-too-human limitations.

Before the subprime mortgage crisis, Edward Gramlich, a Federal Reserve official who warned in vain about the potential for disaster, asked, “Why are the most risky loan products sold to the least sophisticated borrowers?” The question, he suggested, “answers itself — the least sophisticated borrowers are probably duped into taking these products.”

Similarly, there’s clearly a lot of profiteering in medical billing, with the victims disproportionately those least able to understand what’s happening.

Beyond all that, I’d suggest that an excess of choice is taking a psychological toll on many Americans, even when they don’t end up experiencing disaster.

There’s a growing body of research suggesting that the costs of poverty go beyond the trouble low-income families have in affording necessities. The poor also face a heavy “cognitive burden” — the constant need to make difficult choices that the affluent don’t confront, like whether to buy food or pay the rent. Because people have limited “bandwidth” for processing complex issues, the financial burdens placed on the poor all too often degrade their ability to make good decisions on other issues, sometimes leading to self-destructive life choices.

What I’m suggesting is that a society that turns what should be routine concerns into make-or-break decisions — a society in which you can ruin your life by choosing the wrong electric company or health insurer — imposes poverty-like cognitive burdens even on the middle class.

And it’s all unnecessary. We’re a rich country — and citizens of other rich countries don’t worry about being bankrupted by medical expenses. It wouldn’t take much to protect Americans against being scammed by mortgage lenders or losing their life savings to fluctuations in the wholesale price of electricity.

So the next time some politician tries to sell a new policy — typically deregulation — by claiming that it will increase choice, be skeptical. Having more options isn’t automatically good, and in America we probably have more choices than we should.