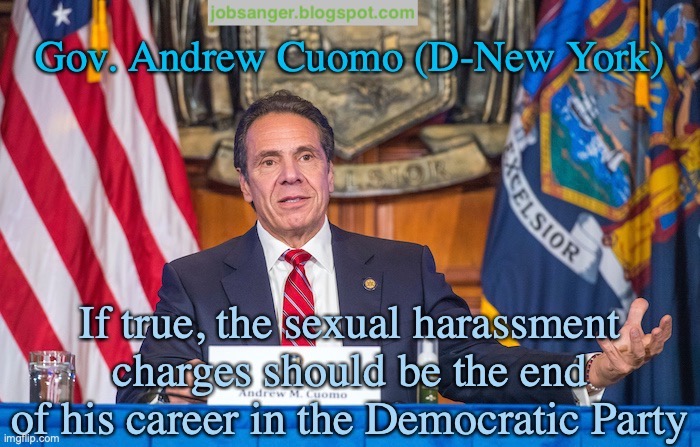 A few months ago, Governor Andrew Cuomo of New York was a hero to many Americans. They liked the way he was handling the pandemic in New York (one of the earliest states to suffer from the virus). There was even talk among Democrats (including me) of him being the party's presidential candidate in the future.

But that was the past. Things are different now.

The first blip on his record was a charge that he had hidden some nursing home deaths from the virus. I don't know much about the particulars of that charge, but even if somewhat true, it probably wouldn't have ruined his political career.

But now there are charges of sexual harassment -- not from one woman, but from two of his former aides. One says he make inappropriate sexual comments, which she took as asking for a sexual encounter. The other also reported sexual comments, and said he actually kissed her on the mouth (without her assent).

Are the charges true? He has not denied them. He just said his comments were "misunderstood". That smells like bullshit to me! He was their boss, and a boss has too much power over an employee to be making sexual remarks (whether he intended them as a come-on or not). He should have known better!

Republicans don't seem to care if their politicians are sex abusers or sexual harassers. They still claim loyalty to a known sex abuser. But Cuomo is not a Republican. He's a Democrat, and Democrats shouldn't put up with this kind of nonsense.

There needs to be an investigation by an impartial person (like the New York Attorney General). If the charges are true, Cuomo needs to publicly apologize -- and he should resign. At the very least, he should not run for re-election.

UPDATE -- There is now a third woman accusing Cuomo of sexual harassment.