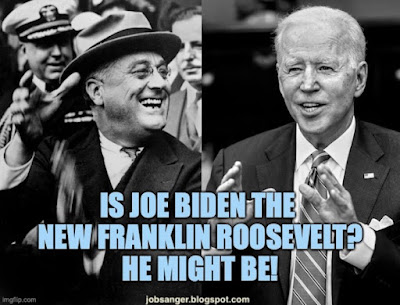 Franklin Roosevelt became president when the country was in trouble, and he was able to pass huge reforms that made the country better and fairer for all its citizens.

Joe Biden also became president in a time of trouble for the country. The nation needs bold leadership and action to conquer the coronavirus and rescue the economy.

The truth is that no president since the end of World War II has been in a position of being able to make huge (and badly needed) changes to the country and its economy. Biden is in such a position.

The following is part of a thought-provoking op-ed by Jonathan Alter in The New York Times. He compares the experiences and opportunities that Roosevelt and Biden share.

“History doesn’t repeat itself, but it sometimes rhymes,” Mark Twain (supposedly) said. If so, Franklin Delano Roosevelt and Joseph Robinette Biden Jr. could be a couplet. With a few breaks and the skillful execution of what seems to be a smart legislative strategy, President Biden is poised to match F.D.R.’s stunning debut in office.

That doesn’t require Mr. Biden to transform the country before May 1, the end of his first 100 days, the handy if arbitrary marker that Mr. Roosevelt (to the irritation of his successors) laid down in 1933. But for America to “own the future,” as the president promised last month, he needs to do amid the pandemic what Mr. Roosevelt did amid the Depression: restore faith that the long-distrusted federal government can deliver rapid, tangible achievements.

With one of the biggest and fastest vaccination campaigns in the world and the signing of a $1.9 trillion dollar Covid relief package, the president has made a good start at that. His larger aim is to change the country by changing the terms of the debate.

Just as Mr. Roosevelt understood that the laissez-faire philosophy of the 1920s wasn’t working anymore to build the nation, Mr. Biden sees that Reagan-era market capitalism cannot alone rebuild it. . . .

Mr. Roosevelt had it easier on Capitol Hill, with big Democratic majorities in both houses. But it’s a myth that Congress, even in Mr. Roosevelt’s first 100 days, gave him a rubber stamp. Southern Democrats were the Mitch McConnells of their day, forcing Mr. Roosevelt to take half a loaf or less on many bills. . . .

The same can be said of Mr. Biden. At 78 (Mr. Roosevelt was 51 when he took office), his persona more snugly resembles grandfatherly Dwight Eisenhower or Ronald Reagan, whose minor verbal slips were also indulged. He is less devious and manipulative than Mr. Roosevelt, and hardly to the manner born. Otherwise they share many traits.

Both men were ennobled by suffering (Mr. Roosevelt’s polio forced him into a wheelchair; Mr. Biden lost his first wife and, over time, two children), which deepened their empathy and connection to people. Before the presidency, both were repeatedly derided as long-winded lightweights destined to sell out liberal principles for votes. Both were seen as too infirm to be nominated by the Democrats, and won in large part because of disgust with their Republican predecessors — Herbert Hoover and Donald Trump, respectively — who mismanaged the crisis of the day.

Both came to office when democracy was at grave risk (many Americans wanted a dictator in 1933) and saw themselves as called to bolster it. As canny politicians with good relationships on Capitol Hill, both learned to surround themselves with smarter people dedicated to making them look good. Up close, both proved hard to dislike. Meeting Mr. Roosevelt was like, as Winston Churchill said, “opening your first bottle of champagne”; meeting Mr. Biden is like one’s first encounter with a tail-wagging therapy dog.

Mr. Roosevelt essentially invented intimacy in mass communications. When he described those listening on the radio as “my friends” and adopted a conversational (as opposed to the usual stentorian) tone, he did for public speaking what Bing Crosby and other crooners did for singing. . . .

Mr. Biden is no great communicator, but his national bedside manner resembles that of “Old Doc Roosevelt.” In his first prime-time address on March 11, he leaned forward as if comforting a patient, shattering any ice of indifference. . . .

Whatever the future holds, Mr. Biden and Mr. Roosevelt are now fused in history by the size and breadth of their progressive ambitions. Jimmy Carter took office when liberalism was fatigued; Bill Clinton said “the era of Big Government is over”; Barack Obama was forced to conform to the mantra of deficit hawks. Mr. Biden was lucky enough to have been elected when what the historian Arthur M. Schlesinger Jr. called “the cycles of American history” are spinning left. He is the first president since Lyndon Johnson who can rightly be called F.D.R.’s heir. Soon we’ll know if he squanders that legacy — or builds on it.