College Alone Will Not Solve The Racial Wealth Gap 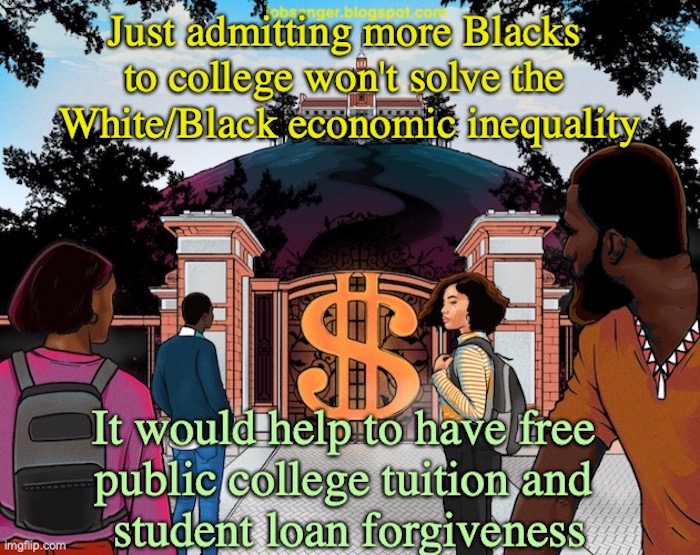 There is a huge gap between the wealth of White families and Black families. One fairly simple solution offered was to just admit more Blacks to colleges. But like with most simple solutions, it turns out the problem is more complicated.

Dorothy A. Brown explains those complications in an excellent article in The Washington Post. I urge you to read the whole article, but here is a part of it:

Higher education is supposedly the ticket to a better future, and it usually translates to a larger salary regardless of race, according to a 2011 study from the Georgetown University Center on Education and the Workforce. But college does not pay off for Black students the way it does for White students. At virtually every step — from taking out loans to facing a racist job market to dealing with repayment plans — Black students and their families have disadvantages. As a result, the Black-White wealth gap widens.

Black college graduates have higher debt loads, on average, than White college graduates. Black debt rises over time, White debt diminishes. Upon graduation, the average Black graduate owes $23,400 vs. the White graduate’s $16,000, according to the Brookings Institution. Four years later, the gap triples. Even at the top end of the income spec­trum, Black students have higher student loans ($4,643, on average) than White students ($3,835), and Black parents take out larger loans to help pay for college ($3,303 vs. $1,903).

What accounts for that difference? First, it’s the schools students attend. Wealthier colleges, which can afford to award financial aid and scholarships, disproportionately admit White students: White students are almost five timesas likely to go to a selective university than Black students, even when controlling for income. Meanwhile, a higher share (12 percent) of Black students attend for-profit colleges than very selective universities (9 percent), because online and part-time features allow them to work while getting their degrees. These schools usually do not award any financial aid and are in effect extremely expensive, given their low graduation rates.

Another factor is the wealth disparity between Black and White families. Black college students are less likely than their White peers to receive tax-free gifts from their parents and grandparents. A study examining financial transfers of at least $10,000 in Black and White families between 1989 and 2013 found that only 9 percent of Black households received such a gift, compared with 32 percent of White ones. And the scale of the gifts was remarkably modest: “White college-educated families received $55,419 at the median and $235,353 at the mean, while their Black counterparts received $36,260 and $65,755, respectively.”

But even parental wealth cannot fully protect Black students from higher debt loads. Black parents hold their assets differently than White parents: They are tied more heavily to homeownership than to the stock market, which makes them illiquid. Research that compared Black and White parents in the highest wealth quintile showed that White parents had $81,827 in financial assets such as stock, but Black parents had just $46,579. White parents had $154,627 in home equity, but Black ones had just $92,555. As a result, even Black students whose families are well-off on paper usually do not have resources readily available to support them. . . .

When a Black student, through herculean efforts, actually obtains a college degree, he or she faces a racist labor market that makes it harder to pay down debt and build wealth. A 2014 study showed that a Black Harvard graduate had to send out eight résumés before getting an interview offer, while a White one had to send out only six. As the selectivity decreased, the disparity increased: For example, with a University of Massachusetts at Amherst degree, White graduates submitted nine résumés before getting an interview offer, while Black graduates had to send out 15. This suggests that, while the credential makes a huge difference for a Black applicant, White students can afford to go to less-prestigious (and generally less-expensive) institutions and receive roughly similar rewards from the labor market. Worse, that same study showed that Black applicants — but not the White ones — were asked to interview for lower-paying jobs than those they applied to. . . .

Layered on top of all of these inequities is our tax code. Within four years of graduation, average Black debt is $53,000 and White debt is $28,000. The tax implications help White graduates and harm Black ones. The deduction for student loan interest, capped at only $2,500 a year, does little to help the average Black borrower, who has higher debt and more interest; the average White borrower, meanwhile, can deduct all of their student loan interest in their first year. (God forbid two Black college graduates get married, since their maximum deduction, combined, remains $2,500.) Meanwhile, when (mostly White) families help pay for children and grandchildren’s educations, those gifts are tax-free.

All of this student debt widens the overall Black-White wealth gap. In 1989, college-educated White households had roughly five times greater wealth than their Black peers. By 2013, that gap had tri­pled. Student debt represents roughly 10 percent of the racial wealth gap when a college graduate is 25 years old, according to professors Fenaba R. Addo and Jason Houle. By age 30-35, it explains about 25 percent of the gap.