GOP Base Identifies And Sympathizes With Insurrectionists 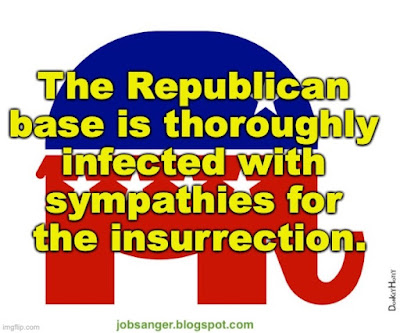 A democracy like ours needs at least two political parties. If a single party has all the power, whether on the right or the left, it will eventually go too far and become autocratic -- killing any democracy!

But all of the political parties must believe in the democratic system for the democracy to survive.

Sadly, we now have one of our two political parties that no longer believes in our democratic system. The Republican Party (both its leaders and its base) now believes its most important goal is to hang on to power -- no matter how they have to do that.

They are willing to suppress the vote, overturn election results that don't go in their favor, and even support a violent insurrection to retain power.

Consider the following part of an excellent article by William Saletan at Slate.com:

Three months after the Jan. 6 attack on the U.S. Capitol, the Republican Party still won’t fully renounce it. In Congress, Republicans are opposing an investigation of the attack unless other incidents are included. On Friday, sponsors of a conference at former President Donald Trump’s Miami resort proudly displayed photos of the crowd that had gathered before the attack. On Saturday, Republican donors cheered as Trump boasted about the Jan. 6 crowd and complained that his allies should have fought harder to prevent the certification of his defeat.

In recent weeks, numerous Republican lawmakers have belittled the attack, defended the mob that precipitated it (Sen. Ron Johnson called them “people that love this country”), voted against a resolution condemning it, or accused liberals of overreacting to it. In February, at the Conservative Political Action Conference, speakers blamed a “rigged election” for provoking the rioters. But the sickness goes deeper. The Republican base is thoroughly infected with sympathies for the insurrection.

In polls taken shortly after Jan. 6, roughly 15 percent of Republicans openly endorsed the rebellion. They did so even when survey questions explicitly called it an “attack,” “storming,” and “taking over” the Capitol. But other questions found broader support. Twenty-three percent of Republicans agreed that “in America today … it can be acceptable for people to use force or violence to try to achieve political goals.” Forty-two percent, when asked about the people who “took over” the Capitol, said they were “mostly peaceful.” Forty-five percent rejected the notion that “those who participated in the storming of the Capitol” were “criminals.” Instead, this half of the Republican base chose an alternative description of the invaders: “They went too far, but they had a point.” Fifty-one percent of Republicans said the party’s leaders “did not go far enough” on Jan. 6 to overturn the election. Only 27 percent called the attack terrorism, and only 19 percent called it a coup attempt.

These sentiments don’t seem to have waned. Since January, the share of Republicans who insist that President Joe Biden did not “legitimately win the election,” nearly 80 percent of the GOP, has hardly budged. Nearly two-thirds of Republicans say Trump won the election, and nearly 30 percent say they’ll “never accept” Biden as president. Two weeks ago, by a two-to-one ratio, Republicans reaffirmed their view that the election was “stolen” from Trump. Last week, 70 percent said there had been enough fraud to change the election’s outcome.

This faith in the myth of the stolen election is driving an enduring sense of affinity with the Capitol invaders. In a Harvard-Harris poll taken in late February, two-thirds of Republicans refused to call the clash an “armed insurrection,” insisting it was just a “protest” that had somehow turned violent. In March, when a Monmouth survey asked about the “anger over the presidential election” that had “led to” the attack, 40 percent of Republicans said the anger was at least partially justified. Two weeks ago, in an Ipsos poll, most Republicans said that the people who “gathered at the U.S. Capitol on Jan. 6” were largely “peaceful, law-abiding Americans.”

Republican politicians often stipulate that anyone who broke the law that day should be fully prosecuted. But many of their own voters don’t believe this. In a Pew survey taken last month, most Republicans and Republican-leaning independents said too much attention had been paid to the insurrection and its aftermath, and 37 percent said the people who “broke into the U.S. Capitol” would probably be punished too severely. (Only 26 percent said they wouldn’t be punished severely enough.) In the Harvard-Harris poll, only 22 percent of Republicans said the national backlash against the insurrection was “a legitimate response to the violence.” The rest, 78 percent, said the attack was “being used as an excuse to silence political voices on the right.”

The violence shown on TV on that day, and in video clips afterward, awakened many viewers to the menace of right-wing fanaticism. But Republicans seem largely unmoved.