How President Biden Wants To Pay For His New Programs 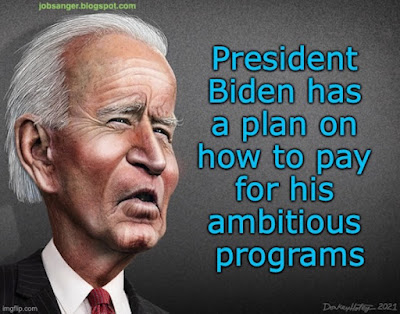 President Biden has several new programs to help ordinary Americans get out of this recession, put their lives back together, and have better opportunities in the future. Let's be honest, hose programs are expensive. He wants to spend several trillion dollars.

Republicans are opposing all of his programs. They are saying the country cannot afford the programs because it would put the country much deeper in debt. They didn't mind going deeper in debt when they passed their tax cuts for the rich and corporations, but they are very resistant to spending money to help ordinary Americans.

Of course, they are wrong. President Biden doesn't want to put the nation further in debt, and he has a plan to prevent that. The Republicans just don't like his plan, because it would mean higher taxes for the rich and corporations.

President Biden's first plan -- the one to fight the virus and give Americans some money -- was done on credit. He needed to get it passed quickly, and that couldn't be done with a battle over raising taxes. But his new plans (infrastructure, healthcare, education, etc.) are going to be paid for. Here (from Axios.com) is how he wants to do it:

To pay for his plans, Biden is essentially relying on five new lines of revenue.