Partisanship Is Just The Reality Of The 117th Congress 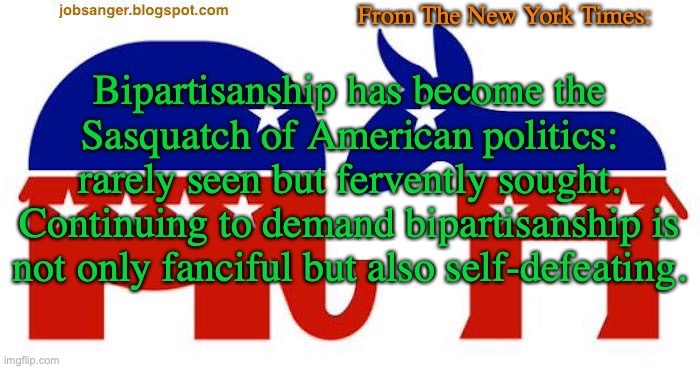 Bipartisanship is all that's being discussed these days by the talking heads of cable news. They seem to think that's the only way any legislation can be passed. But is that a reality-based view? The 117th Congress is the most partisan Congress in decades, and it's a legitimate question to ask if bipartisan legislation is even a possibility in this Congress.

Consider the following. It is part of a guest essay in The New York Times by John Lawrence:

There is nothing wrong with reaching across the aisle to seek common ground.

But insisting on bipartisanship — given the major policy divide between the parties on economic recovery, tax reform, climate change and health care — usually guarantees gridlock (which promotes voter cynicism) or actions that are watered down and ineffective (which are condemned by everyone, right and left).

There is nothing wrong with being partisan. . . .

In the decades after World War II, bipartisan policymaking became the norm because the ideological divisions within both parties — for example, there were numerous liberal Republicans who, since Reconstruction, supported civil rights — compelled cross-party alliances. Most issues did not break down ideologically by party. In fact, for much of the 20th century, supporters of political reform, environmentalism and civil rights could be found as easily in the Republican as in the Democratic Party.

A sizable cohort of moderate to liberal Republicans like Jacob Javits, Clifford Case and Mark Hatfield provided the votes to pass progressive legislation. Similarly, during periods of conservative activism, Republicans could reach across the aisle to find conservative Democrats (like “boll weevils”) to help pass their priorities.

But those circumstances no longer exist, and as a result, bipartisanship has become the Sasquatch of American politics: rarely seen but fervently sought. The opportunities for finding cross-party support for significant legislation, except in response to a national calamity, like the Troubled Asset Relief Program for the financial crisis, have evaporated. The parties have fundamentally changed — there are now very few liberal Republicans or conservative Democrats — and that transformation has hollowed out the middle ground of American politics. Continuing to demand bipartisanship as the validator of sound policy is not only fanciful but also self-defeating. . . .

In the past half-century, the parties have become far more ideologically unified and distinct. In a 2014 report, Pew Research found that a persuadable middle — moderate to liberal Republicans and conservative Democrats — in Congress shrank from 240 representatives and 29 senators in the 1970s to nine and three, respectively, 20 years later to none in 2014. Members of Congress voted with their party leadership 60 percent of the time just a few decades ago but now vote well over 90 percent along party lines, and even more so when voting on major policy issues.

Seeking bipartisanship looks more and more like a fool’s errand. President Barack Obama offered significant concessions to Republicans in hopes of attracting their support on legislation like the 2009 stimulus and the Affordable Care Act, but he came up almost totally empty-handed. Many Democrats were furious that their broader designs — especially on health care — had been trimmed to attract nonexistent Republican support. The consequences of this caution are still with us.

The aspect of political divisiveness that we can do something about — and that exacerbates the partisanship we probably cannot completely undo, at least for a while — is the incendiary rhetorical overkill of political debate. . . .

Our ideologically segregated parties should use political power to accomplish objectives promised in campaigns and then let voters decide if the party has earned the right to govern. True, this approach could result in sweeping policy changes, but voters would then have clarity about whom to hold responsible for governing successes and failures.