Should We Stop Police Enforcement Of Traffic Violations? 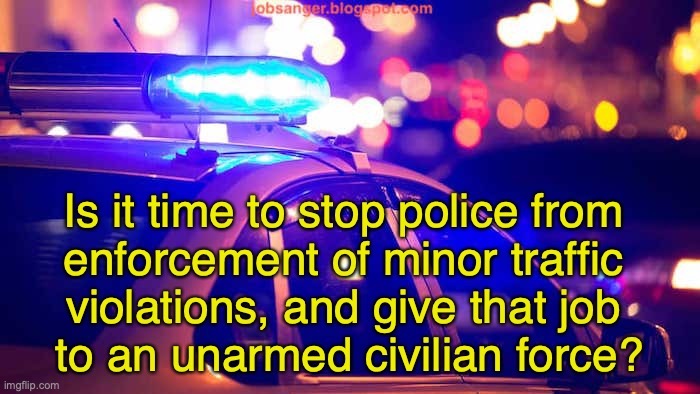 Does that headline sound crazy to you? After all, we need for our traffic laws to be enforced, or people will just ignore them -- and that would make the roads more dangerous for everyone. But the idea is not to stop enforcing those laws, but only to take that job away from armed police -- who have too often escalated those stops into a violent situation that resulted in deaths (especially for minorities). Perhaps it would save lives (of citizens and police) if we gave that job to an unarmed (and possibly civilian) force.

Consider this article by T.J. Grayson and James Forman, Jr. in The Washington Post:

The past week has given us a familiar set of tragedies. With the death of Daunte Wright and the brutal harassment of Army 2nd Lt. Caron Nazario, we must add the following to the list of actions that can shatter Black lives: having expired tags or temporary plates.

Many of the deaths garnering media attention in recent years resulted from armed police officers enforcing traffic violations, even minor ones. A Minnesota police officer pulled over Philando Castilefor a broken taillight, then fired seven shots at him. A Texas state trooper stopped Sandra Bland for not signaling when she changed lanes. Three days later, she was dead in a jail cell. According to a Washington Post database, about 11 percent of all fatal shootings by police in 2015 occurred during traffic stops; Black people accounted for a disproportionate share of those deaths.

The individual officers responsible for these harms must be held accountable. But that won’t get to the root of the problem. Often the police are acting in ways that courts have deemed lawful. Not only has the Supreme Court allowed police to use traffic violations as pretext for criminal law enforcement, but also it has said police have “unquestioned command of the situation” during a traffic stop, ratifying the aggression displayed by too many officers during stops.

So, what to do? One set of solutions looks to reduce the types of violations for which police can stop cars. In October 2020, Philadelphia City Council member Isaiah Thomas introduced the Driving Equality Bill, which would prohibit police from pulling vehicles over for traffic violations that do not pose an imminent “public safety risk.” Other jurisdictions are considering restricting law enforcement’s ability to use traffic enforcement as an excuse to investigate more serious crimes, a practice that has increased racial disparities in the criminal system.

But while these approaches are improvements, we endorse a more radical response: Get police out of the business of enforcing traffic laws. Rather than continuing to allow weaponized police officers with a tradition of anti-Black violence to enforce traffic laws, we should create dedicated traffic agencies whose sole mission is road safety. As University of Arkansas law professor Jordan Blair Woods argues in a forthcoming Stanford Law Review article, new traffic safety agencies, staffed by unarmed employees, could enforce routine traffic laws with less violence and damage to communities of color. Police involvement would be limited to dangerous situations.

These traffic safety agencies should rely on automation — including speed and red-light cameras. Although we must remain vigilant to ensure that these machines aren’t disproportionately placed in Black neighborhoods, at least we know cameras don’t demean, pepper spray, or kill.

At least one city has moved in this direction. The city council in Berkeley, Calif., has approved a series of reforms, including deprioritizing traffic stops for minor offenses. The city is also investigating the possibility of creating a new Department of Transportation in which civilians, not police, would handle traffic enforcement.

These proposals inevitably spark some questions. Are unarmed workers equipped to handle the realities of traffic enforcement? Are they affordable? Will the public be safe if police can’t use traffic stops as a way to fight more serious crime?

For those worried these proposals will hamper police enforcement of criminal law, research has shown that traffic stops aren’t a good way to solve more serious crime. The Stanford Computational Policy Lab, in collaboration with the New York University School of Law’s Policing Project, recently analyzed traffic enforcement by the Nashville police. Not only did project members find racial disparities in police enforcement, but also they concluded that “traffic stops are not an effective strategy for reducing crime.”

That said, we aren’t blind to the risks of this proposal. Traffic enforcement is the most common type of interaction between citizens and police, and it is hard to imagine ending it. But it is time to take some risks, because the status quo is untenable.