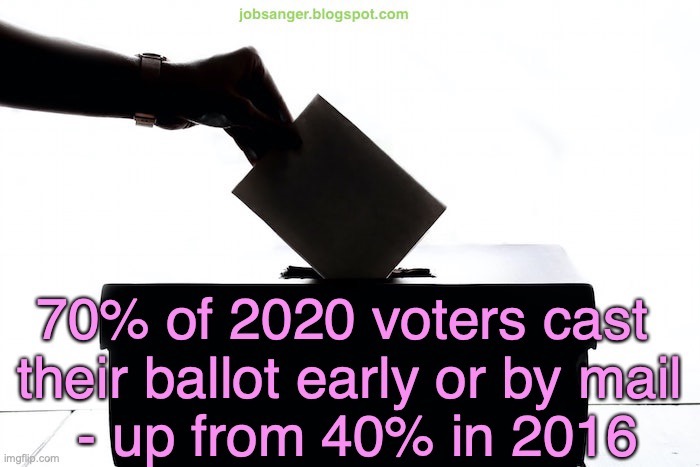 If you were wondering why so much of the Republican effort to suppress votes is directed at early and by-mail voting, this should give you a clue. The following is from AP News (using Census Bureau figures):

More than two-thirds of all U.S. citizens of the voting age population participated in the 2020 presidential election, according to a new U.S. Census Bureau report, and 69% of those cast ballots by mail or early in-person voting — methods that Republicans in some states are curtailing.

That’s an explosion in the use of mail and early voting compared to four years earlier, when just 40% of voters cast ballots that way. The change was in part a result of the pandemic, which prompted health officials to urge voters to stay away from crowded in-person polling places. . . .

While 63% of African Americans voted, that rate did not match the record high of 65% that cast ballots in 2008, when the nation’s first Black president, Barack Obama, was first elected. In 2020, 71% of white citizens and 59% of Latino citizens voted, the Census Bureau found.

White people made up 71% of the people who voted, a 2% drop from four years earlier. Still, because white voters are the demographic with the highest rate of turnout, they had disproportionate power in the election — they are only 67% of U.S. citizens 18 and older, according to the Census. . . .

The 2020 election featured the largest increase in voting between two presidential elections, with 17 million more people voting on whether to reelect Trump than the number who voted whether to make him president in 2016.