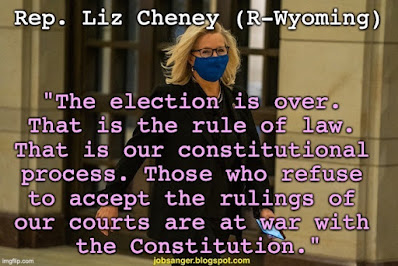 I agree with Rep. Liz Cheney on almost nothing. She is a die-hard conservative and I am a proud progressive. The times where we agree on policy are few and very far between.

But I can recognize political courage when I see it. "Political Courage" is doing the right thing even when it could cost you politically.  And it is something Cheney has exhibited recently.

She has been vocal in opposing Donald Trump -- believing he has been bad for her party. She derided him for instigating the January 6th attack on the Capitol Building, and she has been vocal in fighting Trump's "big lie" (that he won the 2020 election and was ousted by massive voter fraud). 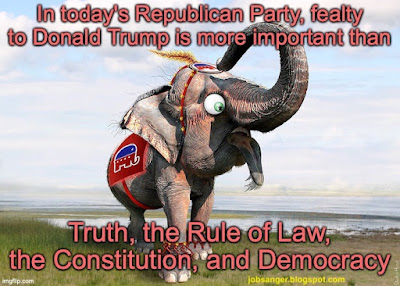 But those things are a sin in the current Republican Party. They no longer value truth, the rule of law, or the Constitution. They sacrifice those beliefs to pay homage to Donald Trump, and whatever Trump does or says is OK with them.

They defended him when he violated the Constitution and was impeached. They went along with his thousands of lies, including the big lie about the election.

And to prove their loyalty to Trump, they have now ousted Cheney from her leadership position among House Republicans.

But Cheney is not backing down. She continues to tel the truth they don't want to hear. That's because she is trying to rescue her party from the clutches of a demagogue. It will be a long road for her, and could even result in her losing her House seat in 2022. But I wish her luck, and I hope she succeeds in her quest.

While I don't agree with her policy positions, I do believe the country needs at least two political parties for democracy to work. That allows debate, negotiation, and compromise for the good of the country. That has worked well for the U.S. for a couple of centuries now.

Cheney has called the Constitution and rule of law to be conservative principles. She is right, but they are also principles embraced by progressives and moderates. They are the bedrock principles that nourish our democracy. The country needs for the Republican Party to return to a belief in those principles.