Cheney Responds To Cult Of Trump's Effort To Oust Her 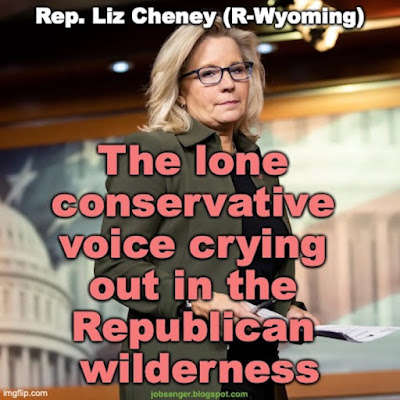 As a progressive, I disagree with almost everything Rep. Liz Cheney (R-Wyoming) supports -- especially her economic views. She is an old-school conservative.

While I don't agree with her views, I do think it's important to have those views represented in our Congress. Our democracy needs conservatives and liberals to debate and negotiate on proposed law. This prevents either side from going too far, and has worked well for this nation in the past, resulting in compromise that was good for the country.

But that puts her at odds with today's Republican Party. That party has abandoned its conservative principles, and really, has no principles anymore. They have devolved into a cult of personality, and whatever lie Trump wants to tell (especially the "big lie" about election fraud being responsible for his loss) is what they support. Clinging to conservative philosophy instead of drinking the cult kool-aid has put Cheney in opposition to other GOP members of Congress, and they don't like it. They will soon vote to oust her from her leadership position in the party.

Cheney is not backing down though. And she has published her response to the proposed ouster in a column in The Washington Post. Here is part of what she wrote:

I am a conservative Republican, and the most conservative of conservative values is reverence for the rule of law. Each of us swears an oath before God to uphold our Constitution. The electoral college has spoken. More than 60 state and federal courts, including multiple Trump-appointed judges, have rejected the former president’s arguments, and refused to overturn election results. That is the rule of law; that is our constitutional system for resolving claims of election fraud.

The question before us now is whether we will join Trump’s crusade to delegitimize and undo the legal outcome of the 2020 election, with all the consequences that might have. I have worked overseas in nations where changes in leadership come only with violence, where democracy takes hold only until the next violent upheaval. America is exceptional because our constitutional system guards against that. At the heart of our republic is a commitment to the peaceful transfer of power among political rivals in accordance with law. President Ronald Reagan described this as our American “miracle.”

While embracing or ignoring Trump’s statements might seem attractive to some for fundraising and political purposes, that approach will do profound long-term damage to our party and our country. Trump has never expressed remorse or regret for the attack of Jan. 6 and now suggests that our elections, and our legal and constitutional system, cannot be trusted to do the will of the people. This is immensely harmful, especially as we now compete on the world stage against Communist China and its claims that democracy is a failed system. . . .

We Republicans need to stand for genuinely conservative principles, and steer away from the dangerous and anti-democratic Trump cult of personality. In our hearts, we are devoted to the American miracle. We believe in the rule of law, in limited government, in a strong national defense, and in prosperity and opportunity brought by low taxes and fiscally conservative policies. . . .

History is watching. Our children are watching. We must be brave enough to defend the basic principles that underpin and protect our freedom and our democratic process. I am committed to doing that, no matter what the short-term political consequences might be.