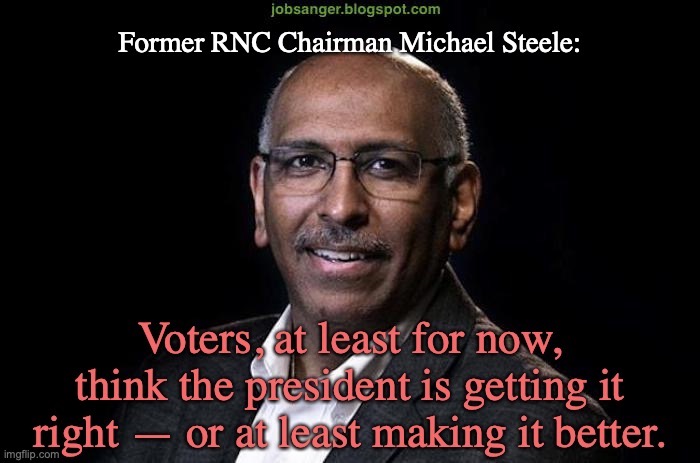 Michael Steele is the former chairman of the Republican National Committee. He's been a Republican all his life. But he's not a Trumpista, and he appreciates having Joe Biden as president. Here is what he had to say in an op-ed for MSNBC:

The responsibility of those we elect to lead, whether during a depression or a pandemiccoupled with tectonic social unrest, is to be an honest broker on our behalf. They must be fearless in enacting policies that encourage greater economic growth and social reforms; and visionary in fostering a climate that promotes job creation while remaining responsive to the welfare of those all too often left behind as growth takes hold.

Much of what has been written and said about President Joseph R. Biden overlooks this essential quality to his success. His time as both a senator and vice president positioned him well to understand that passing a big agenda — be it social or economic — requires the discipline of leadership. His immediate predecessor failed to pass much of anything — perhaps because he lacked both discipline and leadership.

People are acutely aware of what is happening right now across the country. From Covid-19 recovery to racial inequality and policing, Americans are closely monitoring how well Biden is managing these rather difficult and highly charged issues. As he has crafted his policy on the pandemic and now infrastructure, Biden has shrewdly sat down with us at the proverbial kitchen table to explain what he wants to do and why. Even more importantly, he has asked us to help by doing our part.

Biden’s approach is quite different from what we have seen from other presidents in recent years. He seems less concerned with the obvious Democrat vs. Republican rancor. Perhaps, it is because he is familiar with the ways of Washington and knows the political divides that block progress are mostly designed for partisan showboating. It should surprise no one that he has so far steered around such resistance and engaged more directly and personally with voters.

And it’s working. Not only does a recent Pew Research Center pollhave his job approval at 59 percent, but also the latest NBC News poll has 69 percent of Americans approving of the president’s handling of the coronavirus pandemic and 52 percent approving of how he’s managing the economy. And even though his approval is upside down with voters on China (35 percent), the gun issue (34 percent) and border security/immigration (33 percent), the American public does not seem generally to be holding those issues against him.

The difference is leadership; and people are warming to Biden’s brand. As one NBC News poll respondent noted, “The best thing about Joe Biden is I don't have to think about Joe Biden.” In other words, they trust him. . . .

Republicans and even some progressives may want to see Biden’s first 100 days through a strictly partisan/ideological lens in which the administration is spending too much and getting it all wrong. But voters, at least for now, think the president is getting it right — or at least making it better.

The American people want safety and they want normalcy. Parents want their kids back in school; small-business owners want to welcome back their customers; and everyone wants hugs and handshakes to replace sanitizers and masks. Biden thinks he can make that happen, and folks so far believe him.

The president has demonstrated his concern and his compassion for everyday people. He is helping them look forward, not backward. He is raising their spirits rather than stoking their fears. He accepts the bottom line of leadership — the buck stops here — rather than blaming others. For countless Americans, that’s enough for them to “examine and assimilate in a mental picture” what leadership looks like. And so far, they like what they see.