GOP Needs More Than To Dump Trump - It Needs Principles 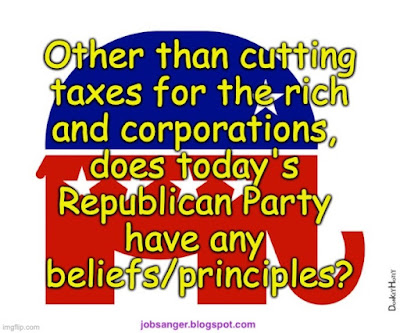 If you've been paying attention to politics, then you'll know that House Republicans are probably going to vote to remove Rep. Liz Cheney (R-Wyoming) from her party leadership post this week. They are doing it because she refuses to accept the big lie that Trump won the election and was robbed because of massive voter fraud -- and she has been very vocal about that.

Cheney understands that clinging to Trump and accepting his lies is hurting the party. She is trying to save the party, and make it once again a mainstream party that could appeal to most voters. That's going to be a monumental task, since most GOP voters believe Trump's "big lie" about the 2020 election. But even if she were to succeed in getting the party to dump Trump, that would only be the beginning of her battle to save the party.

That's because the party seems to have abandoned its principles. This was evident in the 2020 party platform. In that document, they didn't even bother to lay out any principles or beliefs, but instead wrote that the party supported whatever Trump wanted to do. The problem with that is that Trump has no beliefs -- except to do whatever would make him and his family richer.

Jennifer Rubin describes this problem in The Washington Post. Here is part of what she wrote:

The MAGA cult, however, is not Cheney’s only problem. As became evident during the past administration, Republicans don’t believe in much of anything other than retaining power. Are they pro- or anti-Big Business? Protectionist of free-traders? Do they want to rebuild international alliances or go it alone? Are they climate-change deniers? Do they care about deficits (or only if they aren’t caused by tax cuts)? If you have not got a clue, you are in good company.

If Cheney is to slay the MAGA dragon, it will be essential to not only explain what she is against — historical revisionism, lying, coziness with Vladimir Putin, white supremacists — but also what she is for. The agenda of the GOP in which she spent most of her adult life is badly out of date and, frankly, unappealing in the 21st century. Tax cuts for the wealthy and for corporations may excite the donor class, but actual voters — especially those non-college-educated, White voters the GOP has been courting — would just as soon sock it to the rich. Repeal of Obamacare excites the public about as much as cutting Social Security and Medicare (that is, not at all). Even Republican voters applauded massive government intervention to battle the pandemic and recession, shrugging their shoulders about deficits. Be it good or bad policy, withdrawal from Afghanistan wins something akin to 70 percent approval among voters.

The Western conservatism of Barry Goldwater, Ronald Reagan and George W. Bush — as well as Cheney’s father, Richard — tilting toward libertarian especially on social issues and pro-immigration — is wholly at odds with a party dominated by White evangelicals playing on their congregants’ grievances and fears of replacement. On social policy, a third of Republicans are pro-choice and a majority support LBGTQ rights.

As a political matter, the GOP has cast its lot with a shrinking demographic (White, evangelical, older and rural voters) while alienating college-educated voters, women and younger adults. The base is too narrow to be sustainable, yet inching away from it risks losing whatever support Republicans can count on.

It would be much easier for Cheney and breakaway Republicans had the Democrats nominated Sens. Bernie Sanders (I-Vt.) or Elizabeth Warren (D-Mass.) last year. However, much as Republicans would like to convince Americans that Joe Biden is a raving socialist, his policies do not strike a majority of Americans as extreme or exotic. They like the idea of subsidized child care, access to broadband and free community college.

There is no magic policy formula for breakaway Republicans, but they might start with three fundamental principles: Every legal voter should have easy access to a secure electoral system; America is not defined by race, religion or place of birth; and objective reality — be it in counting votes, measuring climate change or addressing a pandemic — is worth defending. That’s not much, but that is enough for starters.