If Corporations Are People, They Should Pay Same Tax Rate 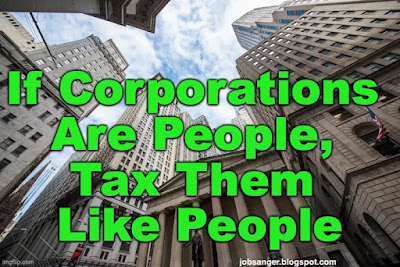 But while corporations enjoy those rights (like the ability to donate money for political causes), they don't pay the same tax rate as people. But they should.

The following article (by Timothy Noah in The New Republic) callas for a more equal taxation of corporations. If they enjoy the same rights as people do, then they should pay the same taxes. Here is part of that excellent article:

As if by magic, corporations were rendered human by the Supreme Court’s 2010 Citizens United and 2014 Hobby Lobby decisions. They may now exercise free speech rights through unlimited political spending and enjoy freedom of religion by denying employee health care coverage for birth control pills, diaphragms, and IUDs. As Mitt Romney famously chided a heckler at the 2011 Iowa State Fair, “Corporations are people, my friend.”

But not even today’s new, improved Romney would ever suggest that corporations are people when they pay their taxes. Suggest to a conservative that these notional human beings should pay the same income tax as actual human beings, and he or she will slam into reverse and tell you, “Corporations aren’t people at all. They’re really just an inanimate pile of stock certificates that gets taxed twice, first as corporate income and then as individual shareholders’ capital gains.” This double-taxation argument is disingenuous because the people who make it usually want to eliminate taxes on both the inanimate part (corporations) and the people part (capital gains); in reality, they don’t want capital to get taxed at all.

The Roberts court’s doctrine of corporate personhood is wrong. Corporations are not, in fact, people. If you prick them, they do not bleed, and if the high court were to resume barring them from pouring money into super PACs or denying contraception coverage, nobody’s rights would be infringed. It would be fun to impose sauce-for-the-goose consistency on conservatives by taxing corporations the same as we do people, but that doesn’t make much practical sense because it would put the United States out of sync with corporate tax rates in other countries. But we can certainly tax corporations more than the modest 28 percent that President Biden proposes. That’s an increase over President Donald Trump’s 21 percent, but it’s well short of the 35 percent rate that was in place before Trump slashed it in 2017. If we restored that 35 percent rate it would still be two percentage points below the top marginal income tax rate for Homo sapiens, and nearly five percentage points below the 39.6 percent top marginal income tax rate on actual (wealthy) human beings that Biden has proposed.

Capital gains are a different story. Corporations sort of do become human when they generate capital gains, in the sense that capital income flows to real people, not notional inanimate entities endowed with fanciful rights. Consequently, there’s no logical reason why capital income should be taxed at a lower rate than labor income, as it is today, with a top rate of only 20 percent. Income is income, and it should all be taxed at the same rate. Believe it or not, for a few years in the late 1980s and the early 1990s, the top capital gains rate and the top marginal income tax rate wereidentical. The president who made this happen was none other than that well-known Bolshevik, Ronald Reagan. The shadowy Marxist-Leninist figure who first advised Reagan to do so was Don Regan, who, prior to becoming treasury secretary, spent a decade as chairman and CEO of Merrill Lynch.

Now Biden is readying an increase in the capital gains tax that would once again align the top rate with that proposed top income tax rate of 39.6 percent, and an outraged investor class is pretending Reagan and Regan never lived. “That preferential rate has persisted for decades,” thundered an April 25 editorial in The Wall Street Journal (“The Dumbest Tax Increase”), “through Democratic and Republican administrations.” Never mind that Regan’s Treasury Department said, in 1984, that “all income should be taxed equally,” or that for at least part of the economic expansion under Reagan—an expansion that former Journal editorial page editor Robert Bartley proudly anointed “the seven fat years”—the top capital gains rate matched the top marginal income tax rate.