Like Roosevelt, Biden Wants To Invest In American People 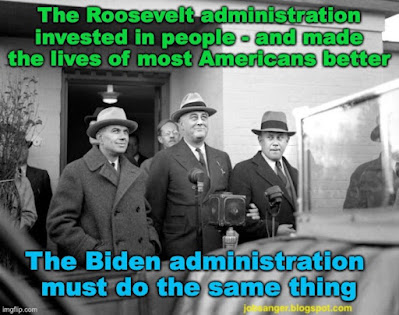 With the nomination of the pandemic, the recession, and the growing economic inequality in the United States, the Biden administration faces a crisis this nation has not seen since the Great Depression.

President Roosevelt brought this nation out of that previous crisis situation by spending big to invest in this country and especially its people. And he did it in spite of Republican opposition to his programs.

Now the Biden administration is taking that same course to guide this country to a recovery that is fair to all Americans -- and he will have to do it without any support from congressional Republicans. It will be harder this time, because Biden doesn't have the Democratic majority that Roosevelt had, but it must be done. Just returning to normal is not enough. He must make the country and its economy fairer to all its citizens.

The best argument for President Biden’s three-part proposal to invest heavily in America and its people is an echo of Franklin Roosevelt’s explanation for the New Deal.

“In 1932 there was an awfully sick patient called the United States of America,” Roosevelt said in 1943. “He was suffering from a grave internal disorder … and they sent for a doctor.”

We should be cleareyed about both the enormous strengths of the United States — its technologies, its universities, its entrepreneurial spirit — and its central weakness: For half a century, compared with other countries, we have underinvested in our people.

In 1970, the United States was a world leader in high school and college attendance, enjoyed high life expectancy and had a solid middle class. This was achieved in part because of Roosevelt.

The New Deal was imperfect and left out too many African-Americans and Native Americans, but it was still transformative. . . .

In short, the New Deal invested in the potential and productivity of  much of the nation. The returns were extraordinary.

These kinds of investments in physical infrastructure (interstate highways) and human capital (state universities and community colleges) continued under Democratic and Republican presidents alike. They made America a stronger nation and a better one.

Yet beginning in the 1970s, America took a wrong turn. We slowed new investments in health and education and embraced a harsh narrative that people just need to lift themselves up by their bootstraps. We gutted labor unions, embraced inequality and shrugged as working-class America disintegrated. Average weekly wages for America’s production workers were actually lower in December 2020 ($860) than they had been, after adjusting for inflation, in December 1972 ($902 in today’s money). . . .

Biden proposes something more humane and effective — investing in children, families and infrastructure in ways that echo Roosevelt’s initiatives.

The most important thread of Biden’s program is his plan to use child allowances to cut America’s child poverty in half. Biden’s main misstep is that he would end the program in 2025 instead of making it permanent; Congress should fix that.

The highest return on investment in America today isn’t in private equity but in early childhood initiatives for disadvantaged kids of all races. That includes home visitations, lead reduction, pre-K and child care.

Roosevelt started a day care program during World War II to make it easier for parents to participate in the war economy. It was a huge success, looking after perhaps half a million children, but it was allowed to lapse after the war ended.

Biden’s proposal for day care would be a lifeline for young children who might be neglected. Aside from the wartime model, we have another in the U.S.: The military operates a high-quality on-base day care system, because that supports service members in performing their jobs.

Some Americans worry about the cost of Biden’s program. That’s a fair concern. Yet this is not an expense but an investment: Our ability to compete with China will depend less on our military budget, our spy satellites or our intellectual property protections than on our high school and college graduation rates. A country cannot succeed when so many of its people are failing.

As many Americans have criminal records as college degrees. A baby born in Washington, D.C., has a shorter life expectancy (78 years) than a baby born in Beijing (82 years). Newborns in 10 counties in Mississippi have a shorter life expectancy than newborns in Bangladesh. Rather than continue with Herbert Hoover-style complacency, let’s acknowledge our “grave internal disorder” and summon a doctor.