Republican Officials Are Lying (And Doing It Intentionally) 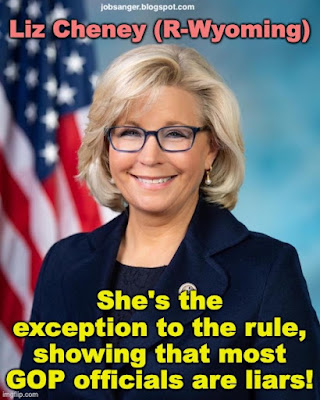 Liz Cheney seems to be the lone Republican in Congress that openly and unashamedly tells the truth about the 2020 election -- that Donald Trump lost, and Joe Biden won (and there was no fraud involved).

They have sold out to support Donald Trump's "big lie" (that he won the 2020 election and Biden was inaugurated only because of massive fraud). And because they no longer respect the truth, they are probably going to punish Cheney by removing her from her leadership post in the House.

It's a lie, but most Republicans will tell it anyway. They know it's a lie, but consider their own political primary chances to be more important than being honest with the American people.  They should be ashamed of lying to protect their own cushy political jobs, but they're not. Shame is also not a value shared by Republicans these days.

The following is part of a column by Michael Gerson in The Washington Post:

For the activist base of the Republican Party, affirming that Donald Trump won the 2020 presidential contest has become a qualification for membership in good standing. For the party’s elected leaders, accepting the clear result of a fair election is to be a rogue Republican like the indomitable Rep. Liz Cheney (Wyo.) — a target for Trump’s anger, public censure and primary threats.

Nothing about this is normal. The GOP is increasingly defined not by its shared beliefs, but by its shared delusions. To be a loyal Republican, one must be either a sucker or a liar. And because this defining falsehood is so obviously and laughably false, we can safely assume that most Republican leaders who embrace it fall into the second category. Knowingly repeating a lie — an act of immorality — is now the evidence of Republican fidelity. . . .

Moral clarity against lying is sometimes made harder by our loose application of the term. When public figures disagree with you in their analyses of tax policy, or welfare spending or Social Security reform, they’re generally not lying. They’re disagreeing. When it’s revealed that someone was previously wrong about an issue — even on a grave matter of national security — it doesn’t mean he or she was lying all along. It means that person was wrong. . . .

It’s important to keep perspective about the stakes of any given lie. There is reason the English language has so many words to describe the shades of culpability in a deception. You can equivocate, or dissemble, or palter, or mislead, or prevaricate, or fib, or perjure. There are mortal lies and venial lies, cruel lies and merciful lies. Context matters. . . .

The context for Trump’s lies has been particularly damning. When Trump falsely asserted that Barack Obama was born in Africa and thus illegitimate as president, it was permission for racism. When he claimed he saw Muslims in New Jersey celebrating on Sept. 11, 2001, it was a vicious lie to feed a prejudice.

But the lie of a stolen election is the foundational falsehood of a political worldview. Believing it requires Trump’s followers to affirm the existence of a nationwide plot against him and his supporters — a plot led by ruthless Democrats and traitorous Republicans, and ignored or endorsed by useless courts and a complicit media. The claim’s plausibility is not the point. Does it really make sense that Attorney General William P. Barr, who found no evidence of election fraud that could have changed the result, was in on the plot? Were the conservative judges Trump appointed who dismissed his rubbish lawsuits really out to get him? . . .

Trump’s lie is not the moral equivalent of fascist propaganda. But it serves the same political function. A founding lie is intended to remove followers from the messy world of facts and evidence. It is designed to replace critical judgment with personal loyalty. It is supposed to encourage distrust of every source of social authority opposed to the leader’s shifting will.

The people who accepted this political mythology and stormed the Capitol were not lying about their views. They seemed quite sincere. And who knows what Trump really thinks? When a congenital liar surrounds himself with sycophantic liars, he can easily lose radio contact with reality.

No, it is the elected Republicans who are lying with open eyes, out of fear or cynicism, who have the most to atone for. With the health of U.S. democracy at stake, their excuses are disgraceful.