Texas GOP Poised To Pass Law To Outlaw All Abortions 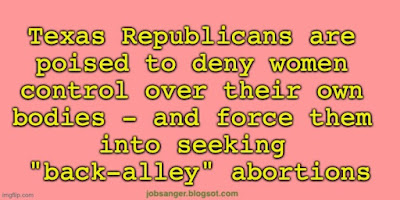 Texas Republicans have complete control of the Texas legislature -- and they have gone crazy. They are passing new laws that most people in Texas do not want.

But perhaps worst of all, they are close to passing a bill that would deny a legal abortion to a women -- denying her control over her own body and forcing her into seeking a dangerous back-alley abortion. This bill is obviously unconstitutional, but they are counting on the Supreme Court overturning Roe v. Wade -- and with the new justices Trump put on the Supreme Court, that is a real possibility.

Here is how NBC News describes the new bill pending in the Texas legislature:

Like several other states have moved to do, Texas would outlaw all abortions once cardiac activity in the fetus can be detected. That usually occurs around six weeks — only two weeks past a missed period, and before most women even know they’re pregnant. It would function as a near total ban on abortion, making no exceptions for rape or incest. In some cases, doctors who need to resolve a patient's miscarriage might also be prevented from doing so.

But it’s the enforcement provisions that make the Texas legislation unique. Everywhere else, only a few public officials can prosecute this kind of law. This legislation goes much further by allowing any person other than a state or local official to sue an abortion provider or someone who “aids and abets” another person in obtaining an abortion, whether or not they were directly involved and whether or not they’re located in Texas.

In other words, if a Texan becomes pregnant as a result of rape and is provided information about how to obtain an abortion by a rape counselor, the rapist could sue that counselor if the survivor had what the state deems an “illegal” abortion. The rapist could also sue the doctor who provided the abortion and anyone else — like a family member — who supported them in getting the abortion.

Similarly, someone who provides funds for an abortion could be sued, even if they didn’t know that’s what the money was being used for. And since anyone who "intends to engage” in providing an outlawed abortion can also be held liable, it’s possible to imagine that the rapist or other party could sue the provider in advance of the procedure to stop it from happening, denying the victim the ability to have the abortion.

These are just a few scenarios. By allowing individual lawsuits as opposed to relying on the state to act against any abortion offenses, the measure unleashes an army of abortion opponents to sue and harass providers, counselers and activists. Once it’s signed, courts could be flooded with potentially frivolous and harassing lawsuits. . . .

Let’s be clear: Texas is about to pass a law that not only violates the U.S. Constitution as determined by Roe v. Wade, but also changes the very nature of enforcing laws — shifting them from state officials to the mob.

Essentially, the Senate and House bills create an almost unlimited potential for defendants, contradicting the Texas Constitution’s minimum requirements to bring civil legal action — i.e., to have standing — in the state. In doing so, they subvert core constitutional and democratic principles in a direct affront to our system of government.