Time's Running Out - Dems Need To Get Bills Passed Now 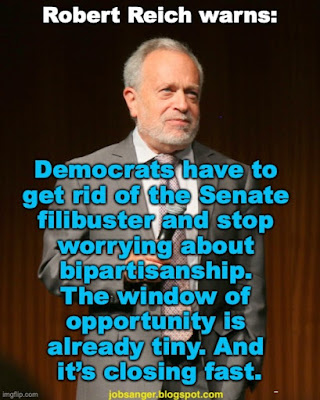 The bill to provide help for Americans suffering from the coronavirus epidemic was passed quickly. But badly needed legislation seems to have slowed. President Biden is seeking bipartisanship from the Republicans -- something that is very unlikely to happen. That has slowed progress in keeping the campaign promises Democrats made to the American people.

Those promises must be kept -- especially passing an infrastructure bill and creating a public option for healthcare -- if Democrats are going to have a chance of keeping control of Congress in the 2022 elections.

It is normal for the party of a sitting president to lose seats in Congress in a midterm election. If Democrats are to counter that, they must pass bills that the public likes -- bills that help most Americans.

The political window of opportunity for Joe Biden and Democrats to deliver on their promises to the American people and pass the legislation the country needs, could close at any time.

We must understand how rare it is that the Senate and the House and the presidency are all under the control of the Democratic Party.

That’s happened in only 4 of the past 28 years

The Democrats’ current Senate majority would end with the shift of a single seat from Democrats to the Republicans. That could happen even during this session of Congress. In 27 of the 38 Congresses since World War II, the party in control of the Senate has changed during the session.

Not to be morbid, but we also need to consider that this Senate has six Democratic senators, over the age of 70, who are from states where a Republican governor would be free to replace them with a Republican should a vacancy occur.

Five other Democratic senators are from states in which a Democratic vacancy would go unfilled for months until a special election was held to fill the seat — which itself would hand the G.O.P. control of the Senate at least until that special election.

Meanwhile, state Republicans — who, not incidentally, control a majority of state governments — are proposing an avalanche of bills to make it harder for likely Democratic constituencies to vote, including people of color, young people, and low-income people. Some states, like Georgia, have already put these voter suppression measures into place.

And with these state Republicans in control of the upcoming once-in-a-decade redistricting process, we could see even more gerrymandering in these states — meaning an even greater likelihood that Republicans gain ground in the House.

If Joe Biden and the Democrats are going to accomplish what a majority of Americans want them to — such as raising the minimum wage, expanding health care, strengthening unions, raising taxes on big corporations and the wealthy, providing free public higher education, and strengthening voting rights with the For the People Act — they’ve got to get it done, now.

That means Democrats have to get rid of the Senate filibuster and stop worrying about bipartisanship.

The window of opportunity is already tiny. And it’s closing fast.